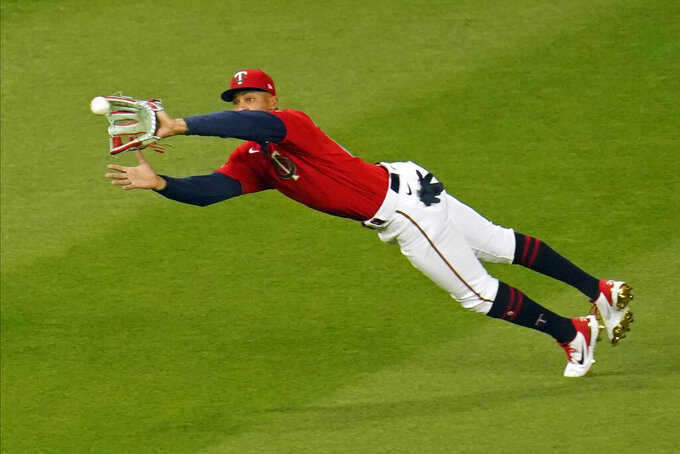 Minnesota Twins center fielder Byron Buxton makes a diving catch of a fly ball off the bat of Texas Rangers' David Dahl in the seventh inning of a baseball game, Tuesday, May 4, 2021, in Minneapolis. (AP Photo/Jim Mone)

Byron Buxton’s breakout season has been put on pause — a disappointing turn for the Minnesota Twins’ oft-injured center fielder. Buxton was added to the 10-day injured list Friday with a strained right hip.

The 27-year-old is hitting .370 with nine homers and five stolen bases and led the majors with 2.4 wins above replacement (per FanGraphs) before Friday's games — a hair ahead of Angels star Mike Trout. A Platinum Glove winner as the AL's best defender at any position in 2017, Buxton has played more than 100 games just once in his big league career.

Outfield prospect Trevor Larnach was called up from Triple-A.

Reds first baseman Joey Votto could be sidelined for a month with a broken left thumb. Votto was added to the 10-day injured list Friday after being struck on the thumb with a pitch by Chicago’s Dallas Keuchel on Wednesday. Votto is not expected to need surgery, but the team expects him to be out at least three weeks and maybe more.

A fifth major league team has been able to relax coronavirus protocols after 85% of its players and other on-field personnel completed vaccination. MLB and the players association made the announcement Friday without identifying any teams and said seven additional teams had reached the 85% level of having received final doses and would be able to relax protocols within two weeks once they are fully vaccinated.

Relaxed protocols include dropping the requirements for facemasks in dugouts and bullpens, and loosening restrictions on mobility during road trips. MLB said Friday that more than 83% of all tier 1 individuals such as players, managers, coaches, athletic trainers and support personnel had been partially or fully vaccinated, up from 81% on April 30.

A tiny crack in Roberto Pérez’s finger has turned into a large problem for the Indians. Cleveland’s two-time Gold Glove catcher will miss at least two months after surgery Friday on a fractured right ring finger. There is no definitive timeline for Pérez’s recovery, but the Indians are planning to be without him for a significant period.

Pérez’s loss is a big blow to the Indians, who entered Friday night’s series opener against Cincinnati leading the AL Central after winning nine of 11. The 32-year-old is one of baseball’s best defensive catchers and handles the Indians’ strong pitching staff. Austin Hedges will get the bulk of starts while Pérez is sidelined with Rene Rivera serving as his backup.

Former Major League Baseball player and manager Bobby Valentine is taking a swing at politics, announcing Friday that he’s running for mayor of his Connecticut hometown. Valentine, 70, currently serves as the athletic director at Sacred Heart University. He posted a video on social media and said he’ll run as an independent candidate in Stamford.

“The greatest commodity I have is my time and I want to give my time and my energy and my wherewithal back to the city that has given me so much over my lifetime,” he said.

Valentine, a Stamford native, was a three-sport high school star in the city. He played in the majors from 1969-79 and managed the Texas Rangers, New York Mets and Boston Red Sox.