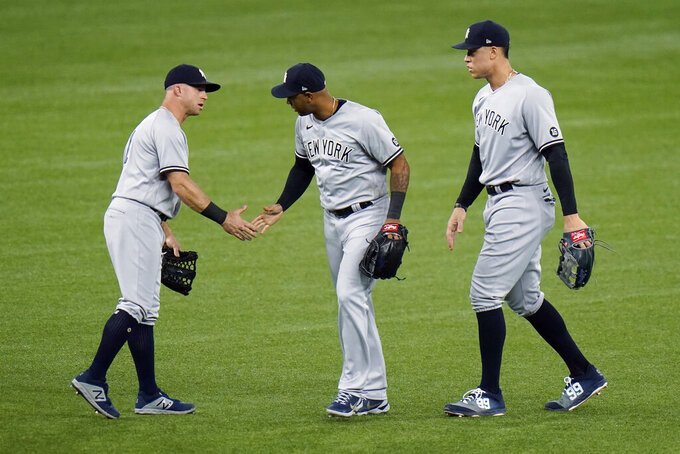 The virus-stricken Yankees are set to open a series in Baltimore a day after revealing shortstop Gleyber Torres tested positive for the coronavirus despite being fully vaccinated and having previously had COVID-19.

Torres is among eight so-called breakthrough positives among the Yankees — people who tested positive despite being fully vaccinated.

“Certainly unexpected,” Yankees manager Aaron Boone said of Torres. “Obviously everyone, Major League Baseball, that’s in charge of testing is looking into that. The variants that could be out there if that is the case.”

The Yankees also have three coaches and four traveling staffers who have tested positive. Boone said all eight are asymptomatic but continue to test positive.

The Yankees said the team is undergoing additional testing and contact tracing, with the assistance of the baseball commissioner’s office and its medical experts. The New York State Department of Health is advising the team.

The San Diego Padres are also dealing with an outbreak after Fernando Tatis Jr. and Wil Myers tested positive this week, with Eric Hosmer, Jurickson Profar and Jorge Mateo also going on the IL for contact tracing. The club is set to host St. Louis after getting Thursday off.

Wade Miley starts for the Reds at Coors Field in his first mound appearance since pitching the season's fourth no-hitter last week.

Cincinnati shuffled its rotation this week to get the left-hander an extra day of rest after he threw 114 pitches while no-hitting Cleveland last Friday. Johnny Vander Meer, another Reds lefty, in 1938 is the only big leaguer to throw no-hitters in consecutive outings.

Acuña led off the game with his majors-leading 12th homer but suffered the injury when trying to beat out a grounder to third base in the seventh.

“Those are scary moments for players, especially when they’ve got the torque and force he’s running with,” Snitker said.

Pitchers are hitting batters and throwing more wild pitches than at any time since 1900, according to baseball-reference.com — most dangerous at a time when velocities are also on the rise.

“We’ve brought guys up in a velocity world,” Marlins manager Don Mattingly said. “We gotta throw harder, you gotta get more spin rate, guys are trying to get more all the time. When you do that, you’re sacrificing the accuracy of what you’re doing.”