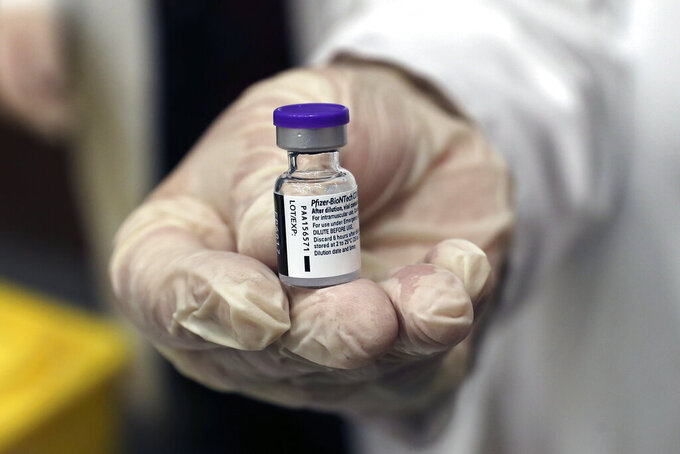 Lebanon launched its inoculation campaign a day after receiving the first batch of the vaccine — 28,500 doses from Brussels, near where Pfizer has a manufacturing facility. More were expected to arrive in the coming weeks.

The rollout will be monitored by the World Bank and the International Federation of the Red Cross and Red Crescent Societies to ensure safe handling and fair and equitable access for all Lebanese.

Lebanon has had a caretaker government since last summer after Prime Minister Hassan Diab resigned. He quit following a massive explosion in the capital's port in August that killed more than 200 people and injured thousands, testing the struggling health care sector and plunging the country deeper into crisis.

Since the explosion, rival political groups have been unable to agree on a new government and reforms demanded by the international community to offer assistance. Pandemic restrictions only worsened the economic crisis.

International organizations and allied countries have extended only humanitarian assistance to deal with the port explosion and the worsening pandemic.

The World Bank offered a $34 million loan to help pay for Pfizer-BioNTech vaccines for Lebanon that will inoculate over 2 million people. Nearly 3 million other vaccine doses are expected to be secured through the U.N.-backed COVAX program. Both are free of charge.

The private sector has been negotiating separately for more vaccines.

Lebanon is in the midst of a surge in coronavirus cases. It has registered about 337,000 cases with 3,961 deaths since its first confirmed case last February.

The country of over 6 million, including more than 1 million refugees, at first managed to contain the virus. But since the August explosion, it has witnessed a surge that only worsened during the holiday season. That's when the government, seeking to boost the economy, eased restrictions in place for months as nearly 80,000 expats arrived in Lebanon.

After record deaths and infections, Lebanon imposed its strictest lockdown yet in early January, with 24-hour curfews and only basic services operating. The lockdown is now slowly easing.

But reflecting a skeptical public, only 450,000 people have registered to be vaccinated, according to the Health Minister Hamad Hassan.

There were scenes of overcrowding in some of the hospitals administering the early doses of the vaccine as media and officials attended.

“Everyone please wait for your turn!” Jha tweeted.

The head of the ICU at the country’s lead hospital in fighting the virus, Dr. Mahmoud Hassoun, was the first to receive the vaccine. After his inoculation, Hassoun urged Lebanese to sign up to get the vaccine to ensure community immunity.

“Please take the vaccine, no matter which one, as soon as possible,” he appealed to the public through LBC TV.

Salah Tizani, a famous actor in Lebanon who goes by the name Abu Salim, was the first among the public of 75-year-old and above to get vaccinated.

“You are the unknown soldiers who have borne a great burden for a year, and who have been up to the responsibility,” he told the medical team at the Rafik Hariri University Hospital.

Some 55,000 high risk health workers are expected to receive the early doses.

Outside the American University of Beirut Hospital, doctors and nurses lined up to receive the vaccine. The private hospital said it aimed to vaccinated 180 people Sunday.

Dr. Rasha Sawaya, a pediatric emergency doctor, was among the first to get the jab.

“I feel privileged, excited that this is happening to Lebanon. A good thing for once is working," she said.