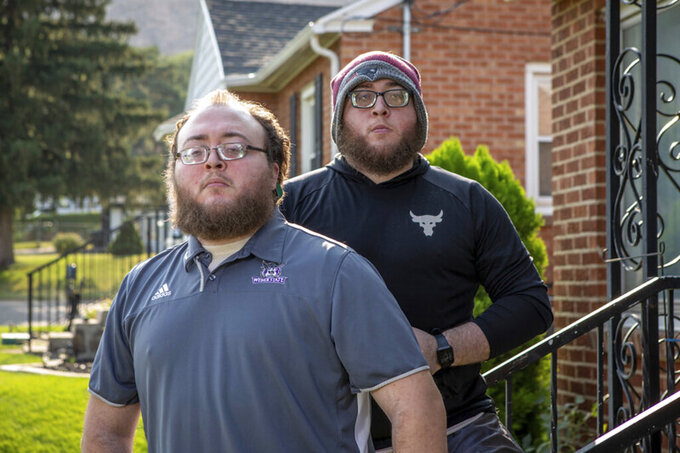 OGDEN, Utah (AP) — Antonio and Armand Berry are bonded by more than having grown together in the womb.

The brothers, both students at Weber State University, are high achievers academically and involved as volunteers in the community, the Standard-Examiner reports. They are also both legally blind.

“My brother and I, we developed a bond over the trials and tribulations of our experiences,” Antonio Berry said. “We’ve come a lot closer than I would go so far as to say normal siblings would due to the struggles he and I have had to face.”

Born two months premature, the twins’ retinas were damaged as a result of having been shaken as infants by their biological father. Now, Antonio Berry is fighting a form of blood cancer and Armand Berry is struggling with multiple sclerosis.

Despite deteriorating health, the Berrys continue to pursue their goals with the support of each other and those around them.

After being shaken, the twins were placed in foster care and soon adopted by their maternal grandparents, who live in Ogden. They both graduated from Ogden High School.

During their time at the school, Antonio got involved with the baseball team as its manager in 2012. Armand joined him in the role the next year. Then-coach Troy Kolan, Armand said, changed his outlook on life.

“He cared a lot more than I was used to,” he said.

Kolan pushed the twins to be active and get involved in sports, no matter their physical limitations.

Inspiration to overcome also came from a faith leader. Upon graduating high school, the brothers both served missions for The Church of Jesus Christ of Latter-day Saints — Antonio in the California Fresno Mission and Armand in the Oregon Eugene Mission.

Antonio’s mission president, Jeffrey Clark, taught missionaries to go by his family motto, “Go big or go home” — a phrase that has since guided the Weber State student.

“Obviously, he meant it from a religious standpoint, but I took that and I really think it can apply to everything in your life,” he said. “Have your goals 10,000 feet in the air, nothing small because you only get this life.”

Both Antonio and Armand are following that advice and aiming high with their goals.

Wanting to follow in Kolan’s footsteps, Armand is pursuing a bachelor’s degree in physical education teaching with minors in sport coaching education, family studies and health promotion teaching. He plans to start his career as a high school teacher, eventually attend graduate school and go on to teach in college.

“Armand is exceptional,” said James Zagrodnik, a physical education professor at Weber State. “He’s extremely hardworking, very aware when it comes to academics, why he’s there and what he’s trying to do to better himself and create outstanding students of his own in the future.”

Armand said he wants to teach physical education because exercise is critical for a good quality of life. But he doesn’t only want to foster a love for physical activity in his students, he also wants to be a friend and mentor to students in need like Kolan was to him.

In an effort to reach his goals, Armand has joined Weber State’s Child & Family Student Association, Future Educators Association, First Generation Club and anthropology and sociology clubs. He is also a member of the National Society of Collegiate Scholars and volunteers at the Treehouse Museum in Ogden.

Antonio, likewise, is pursuing a career aimed at helping others. Studying family studies with a minor in psychology, he hopes to eventually become a marriage and family therapist.

As a missionary, he encountered numerous families that struggled through life’s challenges. He wanted more than anything to help them get through those together.

“If I could go get an education, work my butt off, go do something to change this, maybe one or two generations after I’m gone there can be happier families,” he said.

Toward that end, Antonio served as vice president of the Child & Family Student Association during the 2019-2020 academic year and has volunteered with the Family Support Center of Ogden.

Both brothers plan to graduate in 2022, but their degrees will not have come without challenges.

Prior to the COVID-19 pandemic, both Antonio and Armand had a difficult time traveling from class to class because they had a hard time seeing the path ahead of them — especially stairs. That struggle was compounded during winter when snow and ice covered the ground.

They also struggled to see the board in the front of the classroom, and it is nearly impossible for them to read physical text books, Antonio said. Roxanne Holbrook, the brothers’ representative with Weber State’s Disability Services, works to help address these problems.

“Armand and Antonio, they are such hardworking students and such dedicated learners,” Holbrook said in a press release from the school. “I am proud that they are Wildcats. They are the happy sunshine in my job which can be very difficult at times, and working with these two is why I love my job.”

Because of their illnesses, Armand and Antonio are at high risk if they contract COVID-19. So, they took all of their classes online last semester. Virtual learning, however, brings a host of other challenges for the visually impaired brothers, Antonio said.

When instruction and class discussions take place on Zoom, text is usually too small for Armand and Antonio to see. And when the twins take tests online, Antonio added, proctors often question them about cheating because they have to move their face close to the screen to see.

In addition to being visually impaired, Armand’s multiple sclerosis makes classes even more difficult. The disease affects his memory and causes multiple kinds of physical pain, frequently limiting his ability to walk and write.

“I would be sitting through class and having to pay attention, then I would get some sort of pain,” he said.

He has continued to push through the pain as he works to become a physical education teacher, and because of that, Antonio nominated him for the school’s Wildcat Achievement Award. He won.

“Despite being legally blind and having other health challenges, senior Armand Barry has maintained a nearly perfect grade point average,” reads the school’s website.

“He deserves recognition for what he’s done because he’s going into the physical education field with all of that going on and his physical body essentially giving out on him,” said Antonio, reflecting on why he nominated his brother.

For both twins, their relationship is what they said has gotten them through the difficulties they have faced throughout their lives, and it is what will continue helping them work toward success.