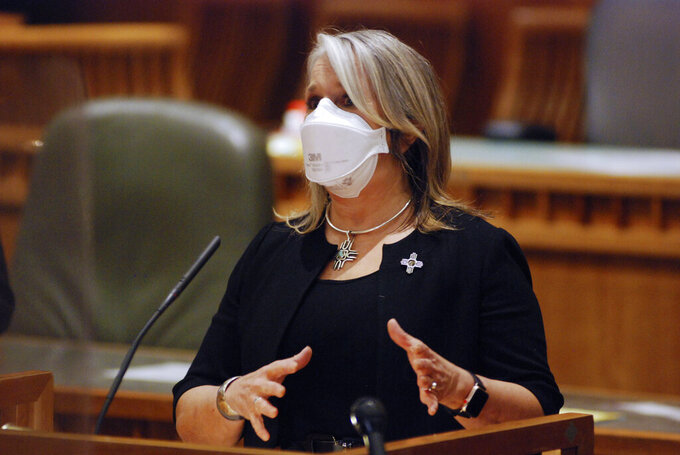 New Mexico Gov. Michelle Lujan Grisham hails the Legislature's accomplishments and calls for a special legislative in session in the coming weeks to approval recreational cannabis legalization in Santa Fe, N.M., at the close of a 60-day legislative session on Saturday, March 20, 2021. The Democrat-led Legislature has charted an economic exit from the COVID-19 pandemic and checked off progressive priorities on policing reforms, abortion rights, medical aid in dying and child poverty. (AP Photo/Morgan Lee)

In the final hours of a 60-day session, legislators ramped up state tax breaks for working families — a finishing touch on a broad package of economic relief measures.

“Hundreds of millions of dollars of tax relief directly the working people — they need that now," Democratic House Speaker Brian Egolf said at a news conference at the close of the session. “We were able to get it done.”

Gov. Michelle Lujan Grisham has eagerly signed bills that provide grants and minimal-interest loans to small businesses, a $600 tax rebate to low-income workers and a four-month tax holiday to the food service industry.

She will decide in coming weeks whether to accept provisions of a $7.45 billion budget request that increases spending by nearly 5% in the fiscal year starting July 1, with a 1.5% pay bump for state and public school employees.

Republican Rep. Rebecca Dow of Truth or Consequences hailed as a shining moment the legislative approval of an independent redistricting commission to redraw political boundaries when the federal Census is finalized. Commission recommendations would not be binding.

“They can choose to discard it, but they can also choose to listen to the citizens,” she said. “It’s a step in the right direction.”

Leading Republicans in the legislative minority said many Democratic initiatives escaped adequate scrutiny in a Capitol building that remains closed to the public as a pandemic precaution and cordoned off by fencing, roadblocks and troops in the wake of the storming of the U.S. Capitol.

“We passed too many bills in the dark of night,” said House Minority Leader Jim Townsend of Artesia. “Our constituents were not present, and their participation was limited.”

Egolf said videoconferencing has increased remote attendance at legislative hearings and will become a permanent option.

Lawmakers embraced an overhaul of the state’s liquor laws in an effort to rejuvenate the tourism and hospitality industries that ground to a halt during the pandemic under aggressive public health orders. The new law overcame resistance from incumbent liquor license holders to make it easier for restaurants to serve mixed drinks and allow home alcohol delivery.

At the same time, a yearslong push to legalize recreational cannabis stumbled amid divergent views among advocates.

Lujan Grisham said she will reconvene a special session of the legislature in a matter of weeks to finalize a proposal for legalizing recreational cannabis. She said security fencing will likely come down before the session.

“We have an incredible framework ready to go for adult use cannabis,” Lujan Grisham said.

The Legislature responded to last year’s nationwide protests over police brutality with approval of a bill that would end police immunity from prosecution and allow civil rights lawsuits in state court on everything from racial discrimination to illegal search and seizure and freedom of speech violations.

With backing from Native American and Black activists, lawmakers approved a bill that bans hair-based discrimination in the workplace and schools.

But bills that challenged police procedures on the use of force, chokeholds and misconduct reviews fell flat.

A budget bill from the Legislature directs vast new financial resources toward public education, as schools across the state prepare to return to in-person teaching in early April after a year of online studies.

Legislators are asking the governor to approve a 5.8% increase in general fund spending on public schools in the coming fiscal year, for a total of $3.35 billion.

Lawmakers also queued up a statewide vote on a constitutional amendment that would tap an additional $250 million annually from the state’s multibillion-dollar trust fund to pay for early childhood schooling and social services.

A bipartisan effort to reverse the governor’s pandemic health and school restrictions fizzled as COVID-19 infections waned and schools were allowed to reopen.

The session highlighted shifting attitudes toward abortion in a heavily Roman Catholic state, as Democrats made good on campaign promises to rescind the state's dormant 1969 ban on most abortion procedures — ensuring abortion access in case the U.S. Supreme Court strikes down its Roe v. Wade decision.

The repeal of the abortion ban came after women won the majority of state House seats in 2020 election.

In another political sea change, a bill to ban the use of traps, snare and poison on public lands won final approval from the House of Representatives by a one-vote margin.

“This is going to be devastating for the people in my community that make a living doing this,” Armstrong said.