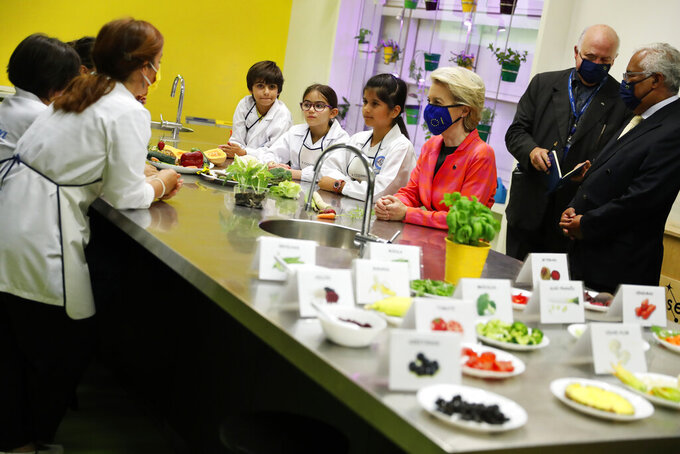 European Commission President Ursula von der Leyen, center, and Portuguese Prime Minister Antonio Costa, right, join schoolchildren in a kitchen lab at the Center for Living Science in Lisbon, Wednesday, June 16, 2021. The president of the European Commission has started in Lisbon a tour of some European Union capitals to announce the initial endorsement of their plans for spending the bloc's massive economic recovery fund. (AP Photo/Armando Franca)

MADRID (AP) — The European Union moved a step closer Wednesday to deploying the bloc’s massive pandemic recovery fund, with a top executive going to Portugal and Spain to announce the bloc’s initial endorsement of their national spending plans.

European Commission President Ursula von der Leyen first visited Portugal, which was the first of the EU’s 27 countries to formally present ideas for spending its share of the 800 billion euros ($970 billion) earmarked last year to help countries out of a sharp economic downturn caused by the COVID-19 pandemic.

She then crossed the border to visit Madrid, where she met with Prime Minister Pedro Sánchez to give the stamp of approval to Spain’s plan to use nearly 70 billion euros ($85 billion) in grant money.

The commission highlighted Spain’s emphasis on the environment with investments in renewable energy and climate-friendly technologies like electric cars.

“This plan will deeply transform Spain’s economy, make it greener, more digital, more resilient,” von der Leyen said. “We have endorsed this plan because it is ambitious, far-sighted and will help build a better future for the Spanish people.”

The commission’s green light for the proposals will have to ratified by the leaders of the member states within four weeks.

In coming years, Spain is also to receive an additional 70 million euros in loans, leaving it only behind Italy as the biggest beneficiary of the funds after both southern European countries were the first of the bloc to be pummeled by the pandemic.

In Portugal, von der Leyen told Prime Minister António Costa that his government’s plan for how to use its 16.6 billion-euro windfall ($20 billion) in grants and loans has earned the commission’s blessing.

Portugal says much of its spending will go to improving the public health network, reducing pollution from public transportation, making housing more energy efficient and buying computers for schools.

So far, 23 of the EU’s 27 countries have submitted their spending plans to Brussels authorities, which vet them to ensure they are in line with the bloc’s policy goals. EU officials will follow up later to check whether nations are abiding by their commitments.

The EU’s 1.1 trillion-euro ($1.3 trillion) seven-year budget from next year will also help national economies recover from the economic hurt caused by COVID-19.

She started her tour of member states a day after the bloc launched its bond sale for the EU Next Generation funds.

Johannes Hahn, the European Commission for Budget and Administration, said Tuesday that the issue of 20 billion euros in bonds was “the largest ever issuance from a European public sector institution and the largest amount the EU has raised in a single transaction.”