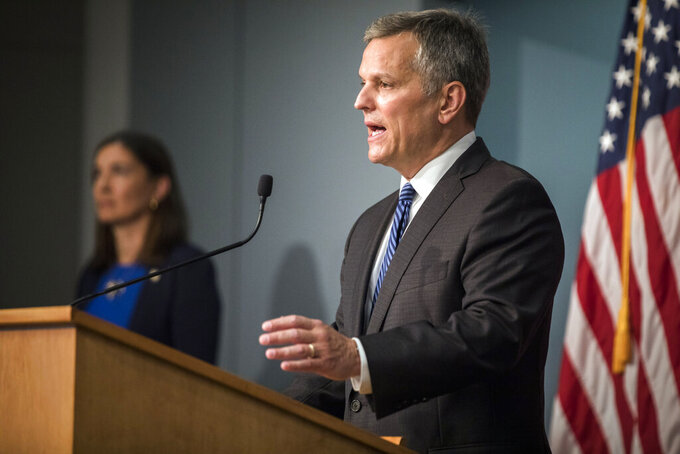 FILE - Attorney General Josh Stein speaks about the creation and goals of The North Carolina Task Force for Racial Equity in Criminal Justice during a news conference on Tuesday, June 9, 2020, in Raleigh, N.C. An organization committed to ending mass incarceration in North Carolina and demanding racial equity in criminal justice has called out Democratic Attorney General Josh Stein. Emancipate NC held a news conference Tuesday, March 30, 2021 to release a letter that rebuked the Democrat and accused him of falling short in protecting civil rights of wrongly accused defendants and those on death row. (Julia Wall/The News & Observer via AP, file)

The virtual news conference and open letter to Stein by Emancipate NC presented a rare public rebuke of the recently reelected Democrat, who is considered a fellow liberal and sympathetic to concerns of racial justice advocates. He's also considered a future candidate for higher statewide office.

Stein co-chaired a task force commissioned by Democratic Gov. Roy Cooper last year in response to the demonstrations following George Floyd's death in police custody in Minnesota. The panel offered more than 100 recommendations on how to eliminating racial inequities in policing, legal procedures and prison time and declared the "criminal justice system is afflicted with longstanding systemic racism.”

But Emancipate NC leaders accused Stein of spending most of his first four years in office lying low on such issues. His attorneys within the Department of Justice represent state agencies and the state's interests in all kinds of legal and law enforcement matters.

“He either remained silent or, worse, was on the wrong side of some of the most critical civil rights and criminal justice issues facing North Carolina," the Emancipate NC letter reads adding that state residents “cannot afford to have their Attorney General sit on the sidelines, or worse, be on the wrong side, of these issues for the next four years.”

Emancipate NC acknowledged that Stein has acted on principle at times, such as when he refused to defend a voter ID law that was challenged in court. But it points out that his office defended the state in its attempt to uphold the legislature's full retroactive repeal of the Racial Justice Act, which had allowed prisoners who claim racial bias as the reason for their death sentence to receive life without parole. The state Supreme Court said last year that most prisoners currently on death row could still use the repeal law.

There's distress among civil rights lawyers “that we have to fight with an attorney general who has positioned himself as the candidate of racial justice on issues like race discrimination in jury selection in the death penalty," Emancipate NC attorney Ian Mance said at the news conference.

Stein’s office put out a statement later Tuesday that did not directly address the letter. But he affirmed that inequities for Black people in the criminal justice are “unacceptable” and expressed his commitment to “pursuing justice for all.” He’s now working with policymakers and advocates to implement many task force recommendations, the statement said.

"With all of the attention currently focused on criminal justice reform, North Carolina has a real opportunity to bring about meaningful change,” the statement said.

Emancipate NC cited how the Department of Justice defended in court the state prison system and its health and safety practices in a lawsuit filed by prisoners and advocacy groups that said inmates face dangerous risks in contract COVID-19 behind bars. State attorneys also defended the conviction of Ronnie Long, who spent 44 years in prison for a rape he said he did not commit. Long was released from prison in August and received a Cooper pardon in December.

The letter called on Stein to stop defending life-without-parole sentences for the youngest offenders, increase resources toward investigating innocence claims and end appeals of convictions of defendants where police or prosecutorial misconduct occurred.

“Stand up for what you believe in. Be more than rhetoric,” Emancipate NC Executive Director Dawn Blagrove said, referring to Stein. “Show us your commitment to what is right through your deeds."

Stein, the son of noted civil rights attorney Adam Stein and a former state senator, won a second four-year term in November by defeating Republican nominee Jim O'Neill by less than 14,000 votes. During his campaign, Stein cited his efforts to protect children, fight the opioid epidemic and reduce a backlog of sexual assault kits at the state crime lab.