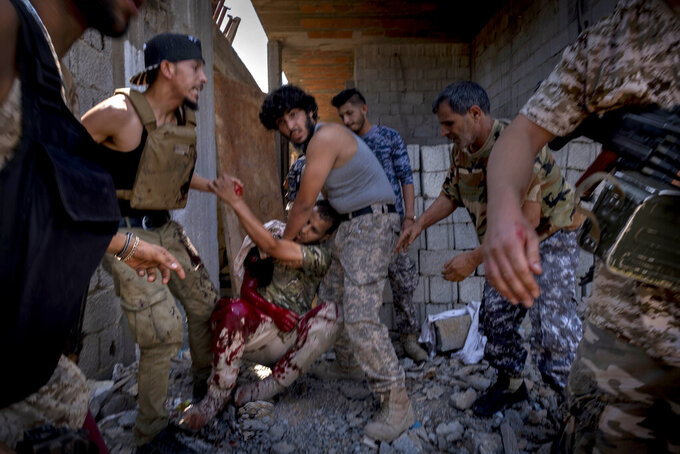 FILE - In this Sept. 7, 2019 file photo, a mortally wounded fighter of the 'Shelba' unit, allied with the U.N.-supported Libyan government, is moved by comrades after being shot at the Salah-addin neighborhood front line in Tripoli, Libya. The head of Libya’s internationally recognized government Tuesday, May 5, 2020, called for a renewal of U.N.-brokered talks to end divisions in the oil-rich country, amid escalating military clashes and increasing tensions between the main players in the capital Tripoli. (AP Photo/Ricard Garcia Vilanova, File)

CAIRO (AP) — The head of Libya’s internationally recognized government Tuesday called for a renewal of U.N.-brokered talks to end divisions in the oil-rich country, amid escalating military clashes and increasing tensions between the main players in the capital Tripoli.

Libya has been in turmoil since 2011, when a civil war toppled long-time dictator Moammar Gadhafi, who was later killed. The country has since split between rival administrations in the east and the west, each backed by armed groups.

Last year, eastern-based forces under military commander Khalifa Hifter launched an offensive trying to take Tripoli, clashing with an array of militias loosely allied with the U.N.-supported but weak government in the capital.

He said the road map could include amending a landmark U.N.-brokered agreement to unite the country in 2015 and appoint a new government or agree on a plan for elections in the short term.

“This call comes as state institutions are increasingly divided, and some officials in these institutions have individually made decisions that exceeded their role and their authority,” Sarraj said.

Sarraj was apparently referring to increasing tensions between his government and the Tripoli-based Central Bank of Libya and with an anti-graft body. The bank has resisted attempts by Sarraj’s government to use the country’s foreign reserves to stave off financial catastrophe. The central bank holds the country’s oil revenues and billions of dollars in foreign reserves.

Tensions rose to the surface Monday when the audit bureau in Tripoli announced that its administrative director was abducted by a militia tied to the Interior Ministry. The audit bureau is an independent body appointed by the Libyan parliament in Tripoli and is a rare check on the misappropriation of funds.

The audit bureau accused the Interior Ministry of “forcibly disappearing” Reda Gergab to prevent him from uncovering financial irregularities and blocking the ministry’s large and suspicious transactions.

Although the Tripoli-based government was set up by the U.N. and recognized by Western countries, many of its institutions, including the Interior Ministry, are in reality staffed and controlled by unruly militias.

Justifying Gergab’s detention, the Interior Ministry argued that the public health crisis caused by the coronavirus pandemic required the disbursal of urgent funds “to rescue the Libyan people” and that the government is merely “carrying out responsibilities” undermined by the anti-corruption agency.

U.N. spokesman Stephane Dujarric said Sarraj's message was the same message the U.N. has been pushing.

“In a return to the U.N.-supported political discussions it’s important that all the parties involved, whether Libyan or those who have influence over those parties, move in the same direction and that is towards political talks,” he said.

The U.N.-backed prime minister has become more isolated, both internationally and domestically, said Jalel Harchaoui, a Libya expert at The Netherlands Institute of International Relations.

“Serraj has been under many contradictory sources of pressure, and his position has become less tenable. His call for a return to the U.N. process fits within that context of great frailty,” he said.

Sarraj’s move came two weeks after Hifter declared the U.N.-brokered deal that created the Tripoli-based government “a thing of the past,” and pledged his authorities would move toward creating a new government.

The declaration has threatened to deepen the chasm between east and west Libya and further complicate U.N. efforts to broker a political settlement to the civil war.

When the day's clashes subsided, Hifter’s forces acknowledged heavy losses inflicted by rival western militias, saying that an officer and 11 fighters were killed.

The Tripoli health ministry reported late Tuesday that indiscriminate shelling by Hifter's forces on a residential neighborhood in the capital struck a house, killing a man and his wife and critically wounded their toddler son.