Liddell scores 19 to lead No. 22 Buckeyes past feisty Irish 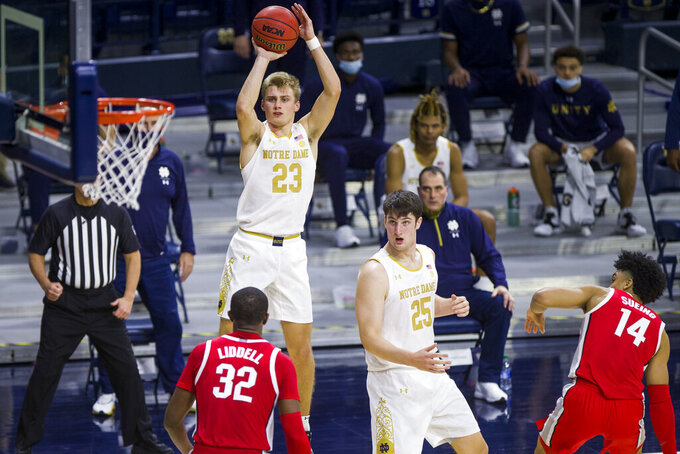 The 6-foot-7 Liddell scored 17 of his career-high 19 points in the second half as the Buckeyes overcame an eight-point halftime deficit to hold off feisty Notre Dame 90-85 in the ACC-Big Ten Challenge.

“(Hollmann) said I needed to play harder and lead the team better,” said Liddell, who finished with a double-double thanks to his 12 rebounds and was one of five Buckeyes in double figures.

C.J. Walker, who finished with 16 points along with Justice Seuing, then hit four free throws down the stretch for Ohio State. Duane Washington Jr. had 13 points and Justin Ahrens finished with 12 — all on 3-pointers — as the Buckeyes improved to 4-0 by hitting 11 of 23 3-pointers and 21 of 24 free throws.

“I thought our performance in the second half was considerably better,” said Holtmann, whose team trailed at halftime 42-34. “We played together better on both ends in the second half. I’ve got a lot of respect for this Notre Dame team. They spread you out and they are difficult to guard.”

The Fighting Irish (1-2) got a game-high 26 points from guard Prentiss Hubb on 8-of-17 shooting, including 5 of 9 from beyond the 3-point line. Nate Laszewski had 17 points and nine rebounds, Dane Goodwin had 16 points and Cormac Ryan had 15 — all in the first half — for the Irish.

“Credit Ohio State – they made a few more physically tough plays around the rim and that hurt us,” said Notre Dame coach Mike Brey, who lost center Juwan Durham with his fifth personal with 8:44 remaining and played just seven players total. “Our guys are crushed.”

The Irish finished the first half with an 8-0 run, holding the Buckeyes scoreless for the final 3:18. Hubb keyed the final run with a 12-footer and then a steal before feeding Laszewski for a slam with 32.4 seconds to go. Ryan’s 15 points came on 5-of-7 shooting but he got only one shot in the second half.

Ohio State: The Buckeyes, who had Saturday home game with Alabama A&M cancelled because of A&M’s COVID-19 issues, were making their first road trip of the season. They open their Big Ten season Dec. 16 on the road at Purdue.

Notre Dame: After having three previous home games cancelled by COVID-19 issues involving those schools, the Fighting Irish were coming off 78-70 home victory Sunday against Detroit Mercy and playing only their third game since opening season with 80-70 loss at Michigan State Nov. 28.

Ohio State: Sunday at home against Cleveland State before the visit to Purdue.