Lillard appealed to front office for tools to win title 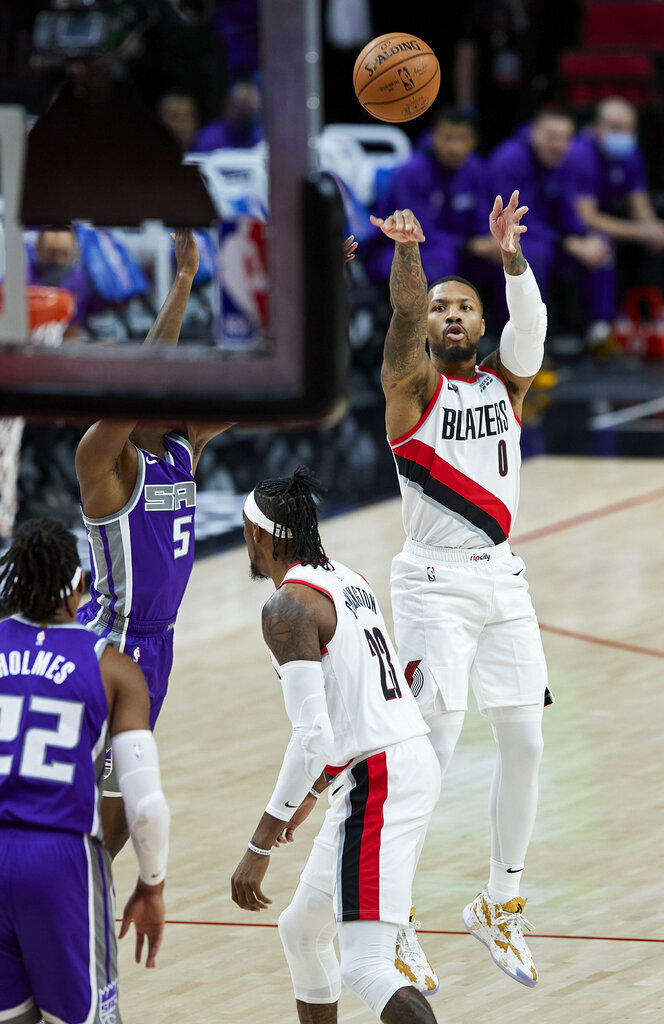 Portland's five-time All-Star said he appealed in the offseason to Neil Olshey, the Trail Blazers' president of basketball operations, for the tools to get there.

“Let’s put ourselves out there to do whatever we can do to give ourselves a real shot, let’s try to bring that glory back to Portland," Lillard said he told Olshey. “You know, it’s been like 50 years. How long has it been since ’77? It has been a long time and I want to be a part of that."

Lillard is heading into his ninth NBA season, all with the Blazers. But Portland has always seemed to miss that final piece that could push the Blazers to a title.

The Blazers got closest in the 2018-19 season when they went to the Western Conference Finals but lost to the Warriors in four games.

“I get up every morning and I train my ass off -- take care of my body. I don’t live a wild life. You know a lot of the steps that I take in my life were so I could come out here and be at my best and play at the highest level so that I could win a championship for this organization and for the city," Lillard said.

“So I’ve communicated that to (Olshey), how much it means and what my desire to do that is. And I think he’s doing his best," he added. “I think he’s really trying to do that, because it means something for him as well."

And indeed, the Blazers made a flurry of moves in the offseason, bringing in Robert Covington, Derrick Jones Jr. and Enes Kanter. They re-signed Carmelo Anthony and Rodney Hood.

Covington was expected to start, along with Lillard, CJ McCollum, Jones and Jusuf Nurkic.

A seven-year veteran who played for Minnesota and Houston last season, Covington had 115 steals, ranking third in the league, and 93 blocks while averaging 12.4 points, 6.6 rebounds and 1.3 assists. His defense will be key to a team that finished 28th in the league in that category last season.

Conversely, the Blazers had the league's third-best offense, thanks in great part to Lillard, who averaged 30 points and eight assists a game last year.

With Covington and Jones expected to start, at least to begin the season, 10-time All-Star Carmelo Anthony will be in a reserve role.

Anthony, who was out of the game for almost a year when Portland signed him in November 2019, said he and the Blazers came to a meeting of minds when he re-signed with the team heading into this season.

“It was very straight to the point from my side, and from their side. We were very honest with each other, both parties were very honest, lots of transparency," Anthony said. “Again it was just coming to an agreement, coming to a mutual agreement about what the situation would be.”

In the end, it was about playing basketball, he said.

Anthony averaged 15.4 points, 6.3 rebounds and 1.5 assists in 58 games with the Blazers last season.

“We’ve said this before: it’s not who starts, it’s who finishes. I think Melo is in a good place and he understands his role on the team,” coach Terry Stotts said.

While McCollum will no doubt slide to the point at times when Lillard rests, Anfernee Simons appears poised to take over backup point guard duties.

He has Lillard's endorsement: “Personally, I believe in Ant.”

The start of Portland's preseason camp was delayed for two days after there were three positive COVID-19 cases within the organization, including one unidentified player. Portland had to shut down its practice facility for cleaning.

Among the teams invited to play in the bubble in Florida, the Trail Blazers made it to the NBA playoffs for the seventh straight season but they were knocked out in the first round by the top-seeded Los Angeles Lakers in five games. The Blazers finished the coronavirus-shortened regular season 35-39.