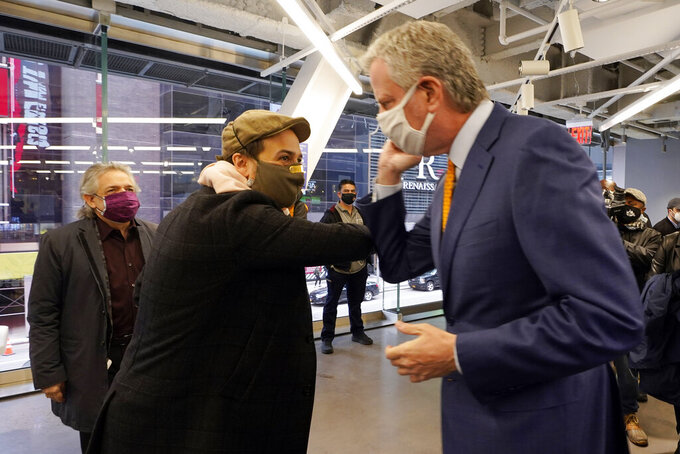 “We want to gather again, and we want to tell stories in the dark,” said Miranda, the author and star of the hit musical about Alexander Hamilton. “We cannot do that if we don’t feel safe and if you don’t feel safe. So the first step in that process is getting our vaccination shots, and the next steps will follow.”

Broadway theaters have been shuttered since the coronavirus pandemic struck in March of last year. De Blasio has said he hopes dedicated vaccination sites will help the industry reopen by September.

The new Times Square vaccine site will be open to workers in theater, film and TV, said the mayor, who stressed the importance of the entertainment industry to the life of the city.

“Yes, it’s part of our economy. Much more importantly it’s part of our identity,” de Blasio said. “It’s part of who we are, it’s part of our hearts. What it means in this city, the theater, the music, the dance, the film and TV, it is our expression of everything that is New York City. It’s our creativity, it’s our heart and soul. We do something here that does not exist anywhere in the world quite like this."

The new vaccination site, housed in a former NFL Experience store, will be managed by Susan Sampliner, the longtime company manager for the musical “Wicked.” Miranda said that “if anyone knows how to make a show run on time it’s Broadway stage managers. So you’ll be in good hands.”