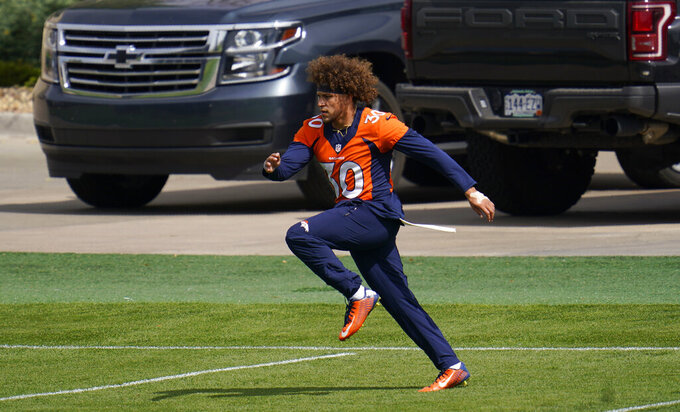 ENGLEWOOD, Colo. (AP) — Two-time 1,000-yard rusher Phillip Lindsay is ready to return to the Denver Broncos’ lineup after recovering from a turf toe injury he sustained in the opener.

“I feel well-rested, toe’s feeling 100% and I’m ready to get back out there and help my team get some wins,” Lindsay said after practice Saturday.

The Broncos (1-3) visit New England (2-2) Monday in a matchup that was pushed back a day because of the Patriots’ coronavirus cases that include Cam Newton and Stephon Gilmore.

Some of his teammates complained about the unfairness of the NFL's postponement that will give them a short work week afterward when the Broncos have no virus infections. But Lindsay said players just have to realize things can change at any minute during a pandemic.

“We never even knew we were going to have a season at one point and then you get in there and anybody can get COVID at any time,” Lindsay said. “You try your hardest to keep it away but it’s a disease — it’s something that spreads.

“Knowing that, you’ve got to go through every day knowing you’re protecting your family, yourself and your job pretty much. And if you get it, and you’re doing the right things, it just happens. You can’t do nothing about it,” Lindsay added. “Now, you’ve got to pray and hope that you heal from it because it’s killing people.”

Although the vast majority of people recover from the virus, it has infected more than 37 million people around the world and killed more than 1 million, including some 214,000 Americans.

“Around the NFL, there’s going to be some outbreaks. We all knew that," Lindsay said. "The NFL knew that. Now it’s about finding ways to stop it so we can continue our season.”

Lindsay's return is a positive development for a Broncos offense that has been hit hard by injuries. Quarterback Drew Lock sprained his throwing shoulder and Pro Bowl receiver Courtland Sutton sustained a season-ending knee injury a week after Lindsay got hurt.

A healthy Lindsay and free agent running back Melvin Gordon could prove one of the league's best 1-2 punches.

Gordon has rushed for 281 yards with three touchdowns and a 4.3-yard average to go with 11 receptions for 45 yards and a score. Last week he had a game-sealing 43-yard touchdown run in Denver’s 37-28 win over the Jets.

“I’m assuming they’re going to try to get us both on the field and use us as weapons to keep teams uneasy,” Gordon said. “We both bring different things to the table and ... I’m excited to see how it goes."

Lock practiced for the third time Saturday but it would be surprising if Brett Rypien doesn't get his second career start Monday night.

Lindsay said both QBs have been sharp at practice this week and he's confident in whichever one gets the starting nod.