Lions' Bevell can't coach vs Bucs due to COVID protocols 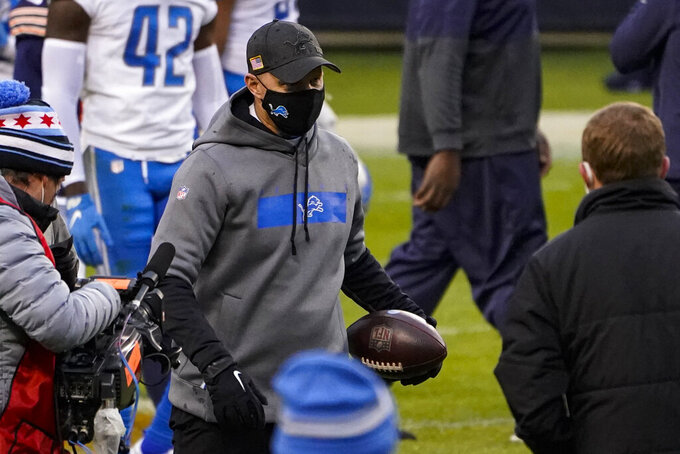 Detroit Lions interim coach Darrell Bevell is the NFL’s first head coach to miss a game because of COVID-19 protocols even though he has not tested positive for the coronavirus.

“It’s kind of the times that we’re living in right now," Bevell lamented.

Wide receivers coach Robert Prince will be Detroit's third head coach this season at Ford Field against the Buccaneers, who are a win away from clinching a postseason berth. Bevell was 1-2 after Matt Patricia was fired last month.

In another key game this weekend, the Browns may have to try and secure a playoff spot — their first since 2002 — on Sunday in New York without starting rookie left tackle Jedrick Wills, who was placed on the COVID-19 list Thursday.

It’s the latest issue on Cleveland’s line, which is already missing starting right guard Wyatt Teller (ankle) and lost the versatile Chris Hubbard after he suffered a season-ending knee injury against the New York Giants. Rookie Nick Harris is filling in for Teller.

Browns first-year coach Kevin Stefanski said “there’s a possibility” when asked if Wills will play this week against the Jets. A first-round pick from Alabama, Wills had close contact with an infected person outside Cleveland’s facility. But as long as he continues to test negative, he’ll be able to be activated and play.

The Browns (10-4) can clinch a postseason berth with a win and losses by either Baltimore, Indianapolis or Miami.

For the Lions, they will lean on two men to call plays for the first time in an NFL game.

Quarterbacks coach Sean Ryan will replace Bevell, who also serves as the team’s offensive coordinator. Evan Rothstein, who helps the team with research and analysis, will calls plays on defense.

The 50-year-old Bevell, who became an offensive coordinator for the Minnesota Vikings in 2006, said he'll never forget the emotions from his first game as a play-caller in the league.

“First, you’re super excited," he recalled. “And then all the sudden you’re like, 'Wait a minute. I’m calling plays in an NFL game. I haven’t done this before.'"

Bevell said he had not tested positive for COVID-19, but he was one of the coaches affected by contact tracing.

Did the other coaches, who were ruled out, wear masks as part of the league's pandemic protocols?

“I think it was all varying different degrees," Bevell said. “So I don’t want to speak for those guys.”

The Lions closed their training facility on Tuesday because one player and one coach tested positive for the coronavirus. They resumed on-field preparations on Wednesday and Thursday to face Tampa Bay.

While the NFL has adjusted its schedule to help teams overcome COVID-19 outbreaks, Detroit's request to have the game played later than Saturday was denied by the league perhaps because the team is out of postseason contention.

“I know that we did push to have things that could help us," Bevell said. “It’s between the league and the club on that. I am disappointed.

“I know if the game was on Sunday I would be there because the timeframe would be up. And really, all these coaches would be able to be there. So, I think that’s the most disappointing part. But we’ve got to go with what they’re telling us.”

The Browns have dealt with injuries and absences because of the virus all season, and Stefanski will handle the potential loss of Wills.

“We have had a bunch of instances this season where guys have stepped up really at every position,” he said before practice. “That is why we have backup players. That is why we work hard to develop all of our players. That is why the guys prepare as if they are playing every play, whether you are a backup or not. It speaks to the type of guys we have around here.”

Stefanski said Wills, who donated more than $50,000 in cash and gifts to needy Cleveland families this week, has more than held his own.

“He continues to improve. He is a young player,” he said. “You see with young players there are some great moments and some moments that he wants to get better. The good news is he does want to get better and he works extremely hard.”

The Chargers' Henry has 60 receptions for 613 yards and four touchdowns, ranking second on the team in all three categories. The 60 catches are the most in Henry’s five seasons with the Chargers, and he was on pace to set a new high for receiving yardage in a season after finishing with 652 yards in 2019.