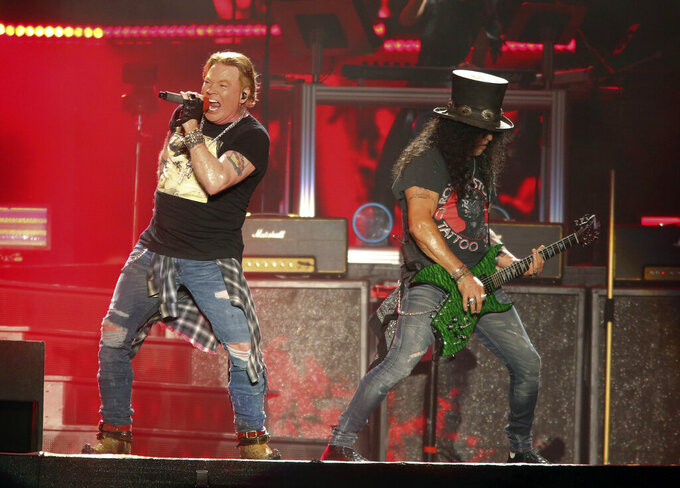 ATLANTIC CITY, N.J. (AP) — Welcome (back) to the jungle: Guns N' Roses is playing an Atlantic City casino this year.

The iconic hard rock band has booked two dates at the Hard Rock casino Sept. 11 and 12 in the clearest sign yet that big-name entertainment is returning to the seaside gambling resort as it emerges from the coronavirus pandemic.

The band says the Hard Rock shows will be the “most intimate” of their tour, which normally plays huge sports stadiums. The casino's Etess Arena has about 6,000 seats.

“Without question, we believe that entertainment is ready to come back,” said Joe Lupo, Hard Rock's president. “The artists and their management have been hungry for the past couple months as we waited for capacity restrictions to lift and vaccinations to increase. We're looking to bring fans in here and make a statement.”

Tickets go on sale Friday at noon, although fan club and other presales will begin before that.

Other big-name acts are due to play Atlantic City this summer and fall, some of which were rescheduled from last year when the pandemic forced the casinos to close for 3 1/2 months, and to operate at reduced capacity even after they opened.

Those restrictions, since lifted, made it impossible to book A-list acts because only a small percentage of seats could be sold.

This year's scheduled shows include Kiss, Toby Keith, Dierks Bentley and Pitbull, all at Hard Rock; Phish on the beach; Michael Buble at Boardwalk Hall; Jerry Seinfeld at the Borgata, and the Beach Boys and Alice Cooper in separate shows at the Ocean casino.