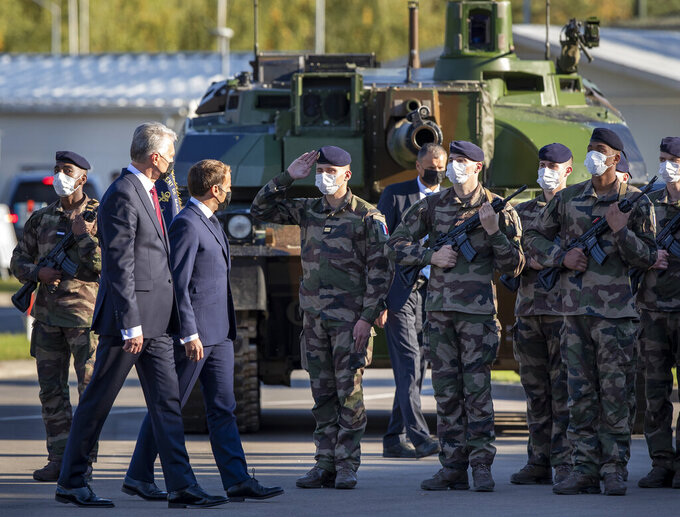 VILNIUS, Lithuania (AP) — Lithuanian Foreign Minister Linas Linkevicius will spend a week in isolation after having been in contact with two infected people who were part of the French delegation during last week's visit by French President Emmanuel Macron, an official said Monday.

Linkevicius has been tested for COVID-19 and authorities were waiting for the results to come back, said Rasa Jakilaitiene, a spokeswoman for the minister.

“The minister feels perfectly OK. He will remain in self-isolation and will work from home for the rest of the week," Jakilaitiene told The Associated Press. "We are waiting for the test results (and) the ministry building was being disinfected.”

French Embassy spokesman Sami Fisek told the AP that two people with the diplomatic mission in Vilnius had tested positive. He declined to identify them. Both were part of the delegation that took part in the Sept. 28-29 visit. It wasn't immediately clear if Macron had contact with the two infected people or if he has been tested.

“The whole delegation coming from Paris tested negative before leaving as requested by the Lithuanian authorities and all necessary precautions were respected during the visit," said Fisek, adding they kept their distance and wore face masks.

Fisek confirmed that the diplomatic mission in the Lithuanian capital was temporarily closed because of the COVID-19 cases as of Sunday.