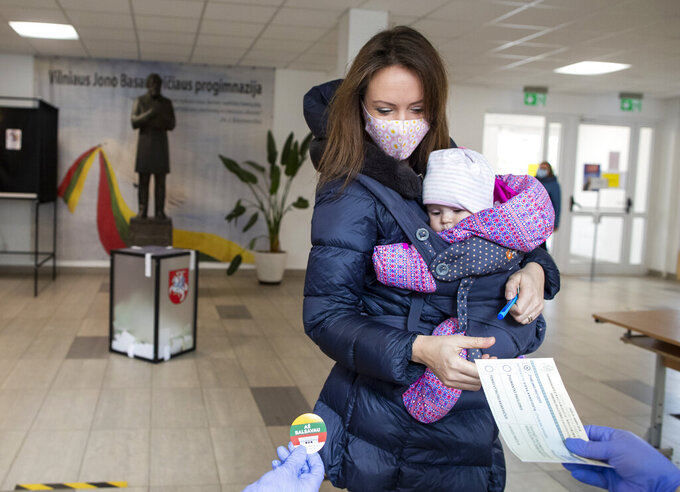 A woman with a child, wearing face mask to protect against coronavirus, arrives at a polling station during , arrives at a polling station during the second round of a parliamentary election in Vilnius, Lithuania, Sunday, Oct. 25, 2020. Polls opened Sunday for the run-off of national election in Lithuania, where the vote is expected to bring about a change of government following the first round, held on Oct. 11, which gave the three opposition, center-right parties a combined lead. (AP Photo/Mindaugas Kulbis)

VILNIUS, Lithuania (AP) — Lithuanians voted Sunday in a parliamentary runoff where the winner will have to tackle a growing health crisis and high unemployment due to the coronavirus pandemic.

The election was widely expected to bring a change of leadership for the southernmost Baltic nation, which has been governed by a center-left coalition for four years. In the first round of voting on Oct. 11, three center-right opposition parties finished with a combined lead.

After polls closed at 1800 GMT, Lithuania’s Central Electoral Commission said initial voter turnout stood at 39.7% which was markedly lower than the 47.2% turnout in the first round.

Lithuania reported 603 new confirmed coronavirus cases on Sunday, the highest daily figure since the start of the pandemic, and its worsening outbreak could have affected voter turnout. Overall, it has seen now just over 10,000 confirmed cases and 134 virus-related deaths.

Results of the election were expected early Monday.

In Sunday's second round, 68 of the 141 seats in Lithuania’s legislative assembly, the Seimas, were up for grabs. The other seats were allotted after the first round, which saw the conservative Homeland Union party winning 23 seats, or 24.8% of the vote, while the ruling Farmers and Greens party only grabbed 16 seats, or 17.5%.

More than 7% of Lithuania’s 2.5 million voters already cast early ballots for the runoff, according to election authorities who set up special drive-in polling stations because of the pandemic. Voters this year must wear a face mask and bring their own pen.

“We vote for change," Jonas Gudelis, a retired engineer, said after voting in Vilnius, the Lithuanian capital. “We're tired of regulations, prohibitions and other nonsense that this government has fed us for the entire four years but failed to deal with the virus properly."

Others said incoming lawmakers would have a difficult time balancing between the country's economic development and restrictive measures designed to combat the COVID-19 outbreak.

“Whoever wins this one will be facing tough times. They will have to choose between public health and the health of the economy," said Julius Kazickas, a medical student from Kaunas, Lithuania's second-largest city. "I gave my voice to those who seem to be more focused on the economy.”

The country fared comparatively well during the first wave of the pandemic, but like elsewhere in Europe this fall, the nation of 2.8 million has reported worrying infection spikes in recent weeks.

The economic impact of the pandemic has hit Lithuania hard: it’s unemployment rate was over 14% in September compared to 9% in February. The outgoing parliament drafted a 2021 budget with a 4-billion euro ($4.7 billion) deficit.

This version has been corrected to correct reference in fourth paragraph to Lithuania, not Finland.