Lock and Jeudy have no chemistry in this pandemic season 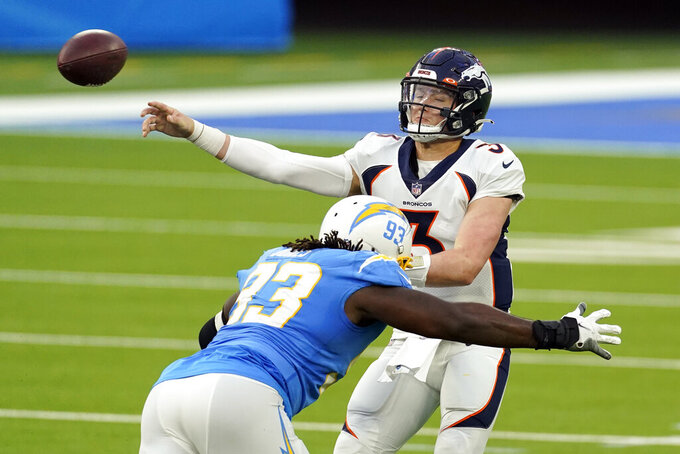 ENGLEWOOD, Colo. (AP) — Wrapping his head around so many drops is more important for Jerry Jeudy than wrapping his hands around Drew Lock’s passes.

“He's proven during this season at different times that he can be a hell of a receiver in this league,” coach Vic Fangio said a day after Denver's comeback slipped right through the fingers of his fiery first-round draft pick who dropped five passes in the Broncos' 19-16 loss to the Chargers on Sunday.

“He's a good route runner. He can catch — he had a bad day yesterday in that regard — but he's proven he has good hands, and I'm sure he'll come back from this and be a better receiver throughout his career because of this day,” Fangio said.

Fangio trusts Jeudy will heed the lesson from his awful afternoon “that the focus needs to be on catching the ball before anything else happens regardless of whether you're in traffic or not."

Jeudy's dreary day came just weeks after he complained on social media about not getting enough attention in Denver's passing game. Jeudy was targeted 15 times Sunday and caught six passes for 61 yards.

The disconnection between Jeudy and second-year quarterback Lock was no aberration but the latest chapter in a troubling season-long trend.

Unable to find any rhythm or chemistry after an offseason conducted via videoconference and a preseason scuttled by the coronavirus, Lock and Jeudy have connected just 41.8% of the time this season. That’s the lowest success rate for any QB/WR tandem in the NFL.

Jeudy has caught 36 of the 86 passes Lock has thrown his way.

Overall, Jeudy has been targeted a team-high 107 times, catching 47 for 716 yards and two touchdowns.

His five drops Sunday give him an even dozen for the year. Lock's passes often aren't on time or on target, but Fangio said most of Lock's throws to Jeudy on Sunday were just fine.

“I thought he made a lot of good throws. Obviously, his numbers would be better if we had caught a few of them,” Fangio said. “I thought there were some throws that could have been a little more accurate. But I haven’t lost my enthusiasm for Drew at all.

"I think he can be a good quarterback in this league. He’s shown flashes of it. He’s showed periods and stretches of it. We just have to become more consistent.”

Combine that endorsement with Fangio confirming that the front office has given him every indication he'll be back in 2021 — “That's been the indication all along" — and it's apparent Fangio, Jeudy and Lock will have to find a way to make things work.

Lock’s completion rate is 57% this season and he leads the league with 18 turnovers, including 15 interceptions, tied for most in the NFL.

“Some of the mistakes and growing pains had to come in actual games this year,” Lock said recently, musing over what a normal 2021 offseason could mean for Denver’s young offense after being denied the opportunity to build that chemistry in 2020 because of the pandemic.

“It would mean everything for us, including myself,” Lock said, noting that they had to skim over so many small details and building blocks this year “just to get to bigger-picture things.”

“I feel like having a full offseason and being able to talk over everything ... that would be huge.”

Jeudy would certainly like to put 2020, and Sunday in particular, in his rearview.

K Brandon McManus, whose short opening kickoff resulted in Nasir Adderley’s 53-yard return to the Denver 39, setting up a score. He had back-to-back clanks off the left upright from 42 and 37 yards.

GM John Elway for arranging a private plane to get Harris back to Denver hours earlier than the team flight so he could attend the birth of his son.

Jeudy may be a great route runner that consistently gets open, but those butterfingers are betraying those fantastic feet.

KJ Hamler is in concussion protocol.

159 — receiving yards by WR DaeSean Hamilton against the Chargers in 2020.

116 — receiving yards by Hamilton against teams not named the Chargers in 2020.

The Broncos have moved into the eighth position in the 2021 draft and a loss to Las Vegas (7-8) on Sunday would secure a top-10 pick.