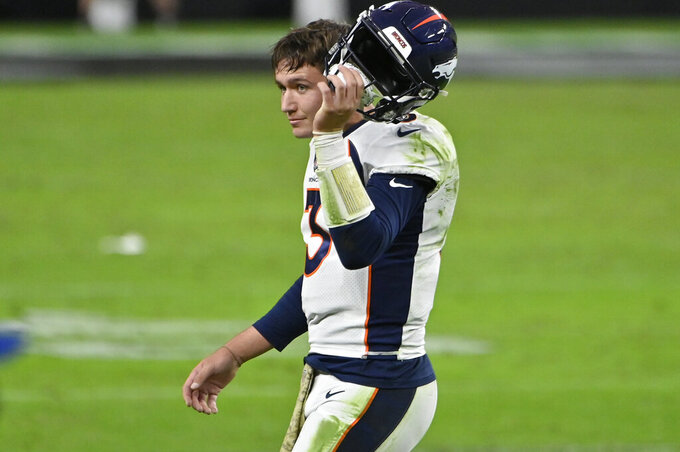 Denver Broncos quarterback Drew Lock (3) takes off his helmet after a play against the Las Vegas Raiders during the second half of an NFL football game, Sunday, Nov. 15, 2020, in Las Vegas. (AP Photo/David Becker)

The pair's status is uncertain for Sunday when the reeling Broncos (3-6) host the surging Dolphins (6-3), who have won three in a row under rookie QB Tua Tungovailoa.

If Fant can’t go, the Broncos would be down to one healthy tight end in Nick Vannett with Jake Butt (hamstring), Albert Okwuegbunam (knee), Andrew Beck (hamstring) and Austin Fort (knee) all on injured reserve.

If Lock can’t go, Rypien would get his second career start.

Rypien led the Broncos past the New York Jets 37-28 in Week 4 despite throwing three interceptions.

“I thought he handled the situation good, I didn’t think he felt any pressure or the moment was too big for him,” Fangio said of Rypien's first career start last month. “I thought he went out there and executed the offense, and I would expect that he would benefit from that if he is to play this week.”

Lock was hurt in the first half on a blindside tackle by Raiders pass rusher Arden Key, although he stayed in and finished the game. X-rays the following day revealed no fractured ribs but Fangio said the second-year QB was in considerable pain, putting his availability this week into question.

Fangio said Wednesday that Lock had “made good progress” in the 48 hours since and “we’ll see how much he continues to make throughout the week.”

The Broncos, who have been hit hard by injuries and COVID-19 this season, are taking Lock’s latest injury in stride.

“It’s no different on my part,” wide receiver Tim Patrick said. “I had good games with both of them. It’s just my job as a receiver is to make the quarterback look good. That’s how I look at it, so whoever’s out there, if the ball comes my way, my job is to make a play on it.”

Patrick caught six passes from Rypien for a career-high 113 yards against the Jets, then had 101 yards on four receptions in Denver’s next game, at New England, when Lock returned from a strained right shoulder.

Patrick was ejected in the fourth quarter Sunday for throwing a punch at Johnathan Abram, the Raiders’ talkative safety.

Asked Wednesday about the skirmish, Patrick said, "You've seen the video. You know the type of guy he is. It just didn't play out in my favor. That's it.”

Lock has thrown 10 interceptions in four games since his return and seems to have regressed from last year, when he won four of his five starts with former offensive coordinator Rich Scangarello.

Now coordinated by Pat Shurmur, Denver’s offense leads the league with 21 turnovers, including an NFL-high 16 interceptions by three different quarterbacks.

“We talked about (ball security) today, especially playing the Dolphins, who excel in that area of taking it away on defense,” Fangio said. “So, this will be a very important week for us to take care of the ball. We haven’t done a good job of that in several games this season and it’s come back to hurt us.”

“Obviously, when your defensive coordinator is down and out of commission it’s tough,” Johnson said. “I know he was in the hospital and stuff so I’m definitely sending my prayers up. We’re definitely missing him, just his morale and the energy that he has being at practice and always preaching on working on takeaways and stuff like that. So, definitely notice a difference not having him out here.”

Patrick Smyth, the Broncos’ chief communications officer, subsequently tweeted, “Ed Donatell is at home recovering after being taken to the hospital last week for COVID-19-related symptoms. Ed is feeling much better, starting to participate in virtual mtgs & doing light physical activity. Ed is grateful for the support & looks forward to rejoining the team!”

Donatell has missed three games. He began quarantining prior to the Broncos’ game against the Los Angeles Chargers on Nov. 1.