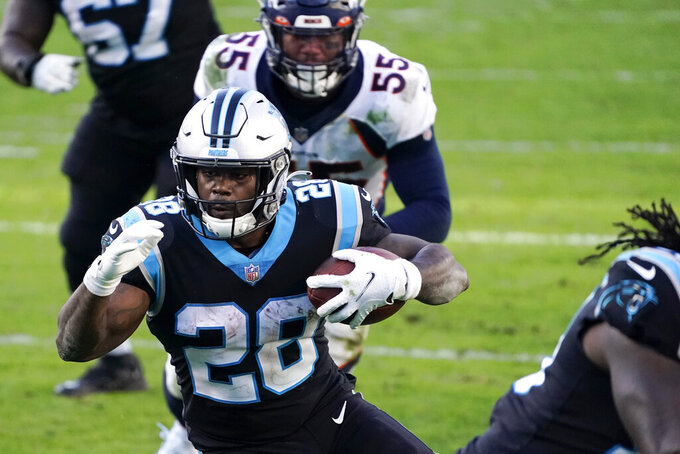 Carolina Panthers running back Mike Davis scores against the Denver Broncos during the second half of an NFL football game Sunday, Dec. 13, 2020, in Charlotte, N.C. (AP Photo/Gerry Broome)

CHARLOTTE, N.C. (AP) — Drew Lock is a gunslinger and, truth be told, he'd prefer to throw the ball downfield on every play if he could.

But the Broncos young QB is starting to take John Elway's advice, learning that stubborn approach doesn't always work in the NFL.

On Sunday, Lock used a series of check-down throws to his running backs and tight ends to set up two long scoring strikes to rookie KJ Hamler, finishing with 280 yards passing and a career-high four touchdowns as Denver defeated the Carolina Panthers 32-27.

“He has preached to me just doing your job and not trying to force anything," Lock said of Elway, the Broncos former star quarterback and current general manager. “Once you force it, those are the ones you want back. It sucks because the ones you end up forcing are in games you want really, really bad. ... It’s all about being calm and focused.”

Lock connected on touchdown passes of 49 and 37 yards to Hamler and also threw scoring strikes to Nick Vannett and Tim Patrick. Diontae Spencer returned a punt 83 yards for his first career score for the Broncos (5-8).

“We were more efficient, and 21 of 27 (passing) is a lot better than what we’ve been doing," Broncos coach Vic Fangio said.

Panthers coach Matt Rhule said the goal was to keep Lock in the pocket.

“He hurt us with with screens and two deep balls," Rhule said. "We haven’t given up many big plays and today we gave up two.”

The Broncos appeared to put the game out of reach when Lock found Hamler running alone down the middle on a post route for a 49-yard strike with 3:54 left in the game, giving Denver a 32-20 lead.

It was a play the Broncos hadn't thrown all week in practice.

“I beat the guy, just ducked my head down, same as I did the last one, just ran full speed to the upright," Hamler said. "Next thing I know it’s in the air. I was like, ‘Oh my God, I’ve got me a play.’ Drew threw a great ball and I just had to go get it.”

However, the Panthers answered with a 75-yard touchdown drive in 28 seconds and Mike Davis' second touchdown run cut the lead to 32-27.

Carolina lined up for an onside kick with the ball resting horizontally on the tee, but instead Joey Slye squib-kicked the ball down the field pinning Denver at the 7. The Panthers forced a quick three-and-out to get the ball back to Teddy Bridgewater with 2:48 left in the game — plenty of time to pull out a victory.

But Carolina couldn't even convert a first down as Curtis Samuel was tackled well short of the chains on a fourth-and-8 pass play, Bridgewater, who was sacked four times, said he thought dumping it off to Samuel was a better option than to risk taking another sack.

“We expect that ball to be thrown past the sticks,” Rhule said of Carolina's final play.

Broncos left tackle Garett Bolles was declared inactive before the game after he came down with an illness Sunday morning, and tight end Noah Fant left in the first quarter when he became sick and did not return.

Fangio said Bolles and Fant were tested for COVID-19 and the rapid tests came back negative. He said both players will remain behind in Charlotte for the night and if they test negative will return to Denver on a private flight Monday.

CHINN DOES IT AGAIN

Panthers rookie linebacker Jeremy Chinn, who had two fumble returns for touchdowns in Carolina's 28-27 loss to the Vikings, came up with another big play, sacking Lock and stripping him him of the ball. Efe Obada snatched the loose ball and returned it to the Denver 3, setting up a TD run by Davis.

The Panthers repeatedly hurt themselves with costly penalties.

In the second quarter alone, Brian Burns was flagged for roughing the passer on a third-down incompletion and linebacker Jermaine Carter penalized for taunting after a run stop near the goal line setting up a 2-yard touchdown pass from Lock to Vannett for the 13-7 Denver lead.

Broncos: Reserve cornerback Duke Dawson was carted off the field in the first quarter after a non-contact injury to his left knee and did not return. Dawson was rushing the quarterback when he tried to stop and make a cut, only to have his leg buckle. Fangio was uncertain of the extent of the injury.

Panthers: Running back Christian McCaffrey missed his 10th game this season with an injury.

Broncos: Host the Bills on Saturday.

Panthers: Travel to face the Packers on Saturday night.