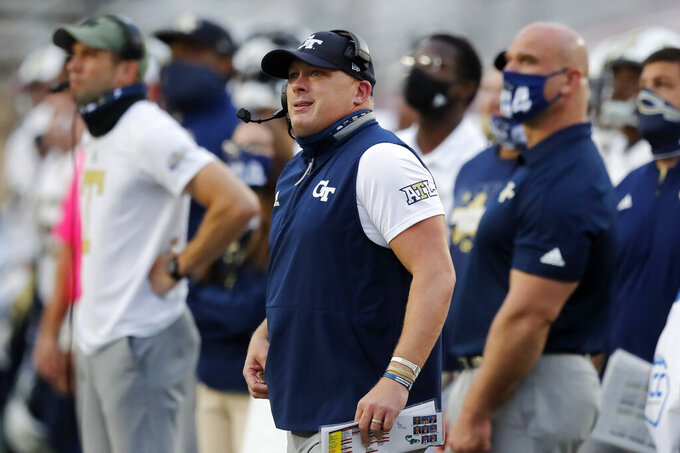 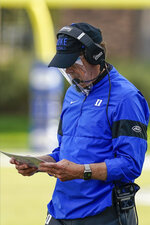 ATLANTA (AP) — Duke and Georgia Tech never expected to be handed impromptu training camps in the middle of their seasons.

Each team is impatient to play a game.

Finally, the long wait is over for the Blue Devils and Yellow Jackets after delays of three and four weeks, respectively, due to the coronavirus pandemic. Duke will visit Georgia Tech on Saturday night in a matchup of teams eager to play despite their combined total of only three ACC wins.

Georgia Tech says this is the school's longest gap between regular-season games in 120 years. In 1900, there was a 38-day wait between games against Sewanee and Davidson.

“It’s been unexpected and we’ve just had to adjust to a sudden change in mentality,” said Georgia Tech coach Geoff Collins. “The guys have handled it well.”

Georgia Tech had an open week before games against Pittsburgh and Miami were postponed. The home game against Pitt was rescheduled for Dec. 12. The game at Miami was tentatively set for Dec. 19.

In the meantime, November has been a month for practice. And more practice.

“We went back and had basically another training camp, one obviously you’re not expecting,” Collins said, adding the goals were to “get some guys strong and get some guys healthy.”

Duke had an open date before before a Nov. 21 date with Wake Forest was first put on hold, then ultimately canceled, due to a combination of positive COVID-19 tests, contact tracing and injuries within the Demon Deacons' program.

Duke coach David Cutcliffe compared the layoff to a long break before a bowl game.

“It’s such an unusual circumstance,” Cutcliffe said. “You don’t know how much — they’ve had a month off — they’ve adjusted or changed. I think we both have certainly tried to continue to work and to grow as a program.

Duke tight end Noah Gray said he spent more time studying film during the extra time between games. He said it was an opportunity to “smooth out some stuff.”

“Although it’s unfortunate that we haven’t been able to play, it’s good to kind of take a break and also kind of do a lot more in the film-study session that will be beneficial to us moving forward,” Gray said.

The unexpected breaks between games was so unexpected, Collins introduced kickball, dodgeball and even a home-run derby into his practice routine. Collins was willing to try anything to keep his players engaged while the coronavirus pandemic interrupted the Atlantic Coast Conference schedule.

“Some of the things we’ve done to maybe create more bonds that maybe you wouldn’t get normally during the course of the season, doing some creative things, doing some fun things,” Collins said.

The Wake Forest cancellation marks the first time since the 1966 season that the two instate programs won’t meet. That leaves Duke with 10 scheduled games, the last being a home date with Florida State on Dec. 5.

The school opted against trying to reschedule the Wake Forest game on Dec. 19, which was the only available date for the Demon Deacons.

Because Southeastern Conference teams are playing only conference schedules, Georgia Tech is not playing Georgia for the first time since 1925. That makes the Yellow Jackets' rivalry with Duke the team's longest continuous series. Georgia Tech has played Duke every year since 1933.

The teams rank among the nation's worst in protecting the football.