A look inside how CBS planned Super Sunday coverage 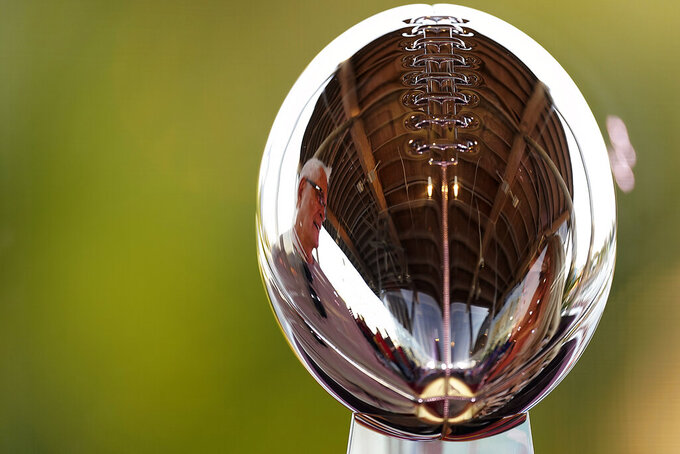 A man is reflected in the Lombardi Trophy at the NFL Experience Thursday, Feb. 4, 2021, in Tampa, Fla. The city is hosting Sunday's Super Bowl football game between the Tampa Bay Buccaneers and the Kansas City Chiefs. (AP Photo/Charlie Riedel)

LOS ANGELES (AP) — CBS and NBC trading Super Bowls is one of the rare times that might end up benefitting both networks.

Under the usual rotation, NBC originally had this year's game from Tampa and CBS owned rights to 2022 in Los Angeles. But in 2019 the networks and the NFL agreed to a switch. The reason was simple: CBS did not want to have its game go up against NBC's coverage of the Beijing Winter Olympics.

While NBC gets an Olympic/Super Bowl doubleheader next year, CBS gets one of the best quarterback matchups in the game's 55-year history on Sunday with Tom Brady's Tampa Bay Buccaneers facing Patrick Mahomes' Kansas City Chiefs.

“Having gotten a matchup between Brady and Mahomes, I would make that trade every year,” CBS Sports chairman Sean McManus said. “If you had asked us in September, what’s the dream matchup? It would have been this one. It’s almost too much to hope for, but we got it. ”

The matchup also is the lynchpin to a day of programming planned for over a year — and in the midst of the coronavirus pandemic. Many might think arranging a network's Super Bowl coverage falls mainly to the sports division, but news, entertainment and other departments are involved, too. It is also the first chance since the ViacomCBS merger was completed 15 months ago to show collaboration by many divisions.

“Obviously, it’s a huge day for sports, but it’s really a big day for the entire network,” CBS Entertainment President Kelly Kahl said. “On the day of the Super Bowl, you get 100 million people, and you try to lure as many of them to stick around and introduce a new show or or bolster an existing show. Every few years, we’re lucky enough to have that.”

Coordinating producer Drew Kaliski has been planning features since April, but even up until this week there have been changes. When Tampa Bay reached the game for the first time a team has played a Super Bowl on its home field, Kaliski began brainstorming. He will showcase Tampa Bay fans who have seen all three of their professional sports teams play for a championship in the last six months.

With COVID-19 protocols still in place — meaning no visits to team complexes — along with a blizzard that hit New York earlier this week, Kaliski has been pleased they were able to do remote interviews.

“We were able to have our Studio 43 set in New York as our home base to do the interviews, which looks phenomenal,” Kaliski said. “With all the obstacles we had to face, I never thought we’d be able to pull it off. And I’m a pretty positive guy. I think the effort of people and the technology that’s out there now, it’s mind boggling to think about it but it just works perfectly.”

After a crazy multi-year stretch covering a pandemic, a political campaign like no other and the transition to a new administration, CBS News gets an opportunity to focus on an event Susan Zirinsky, the division president, refers to as “almost spiritual in the American population.”

The news division has been contributing features on shows and providing to affiliates all week, but its most-anticipated contribution will be Biden's first sit-down interview since taking office.

“Christmas came early,” Zirinsky said about the network landing the first interview with Biden, which was done on Friday. “The presidential interview, you know, it is a tradition. What will appear in the pregame show will be unique. It’s more of a conversation. This is the president’s first interview and a chance for him to kind of touch America.”

Discussions about which show will air after the Super Bowl generally are held off until after the fall television season begins in late September. But with most CBS shows not airing new episodes until November due to production delays during the pandemic, Kahl said they didn't decide on “The Equalizer” until December.

“We want to give ourselves as much information and feedback as we can before we make that choice, knowing the kind of ripple effects it has across the entire company,” he said.

The series, which stars Queen Latifah, has been in the network's plans for a while but production was delayed due to the pandemic. It is a reimagining of the classic CBS show, which aired for four seasons, and also a pair of films starring Denzel Washington.

“When we saw a first cut of the show, we liked it and gauged that it would have a very broad appeal. That makes an ideal candidate to put behind a game like this,” Kahl said.

A special episode of “Late Show with Stephen Colbert” gives casual viewers a chance to see how a show known for its monologues on the Donald Trump presidency has transitioned.

“I think we we haven’t said Trump’s name since he didn’t get elected. So this is an opportunity to really double down on that for people that have not maybe checked us out for awhile,” executive producer and show runner Chris Licht said. “We’ve been doing a lot on the show that has nothing to do with with Trump and we’re really going to highlight that side of Stephen, because that’s really where we are, as a show.”

The show will feature Robert Downey Jr., Tiffany Haddish and Metallica. Licht said when they did a show after the Super Bowl two years ago, ratings data showed new or first-time viewers sticking around for the next two to three weeks.