A look at Israel’s caretaker government after stalemate vote 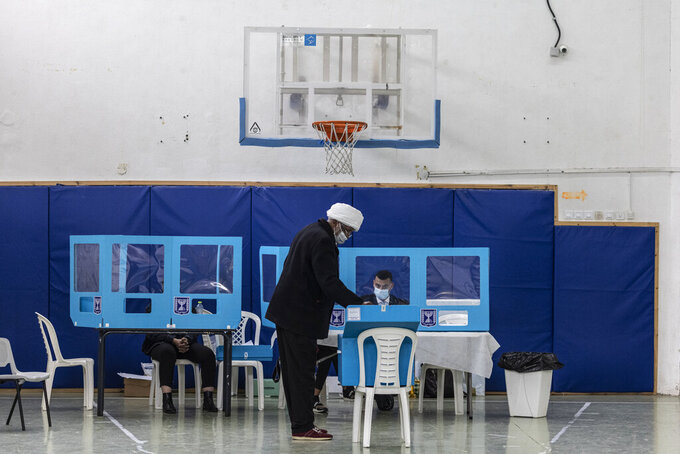 A man votes for Israel's parliamentary election at a polling station in the city of Yavne, Israel, Tuesday, March. 23, 2021. Israel is holding its fourth election in less than two years. (AP Photo/Tsafrir Abayov)

JERUSALEM (AP) — Israel's parliamentary election this week appears to have resulted in yet another deadlock, raising the possibility of a fifth election in just over two years.

The protracted stalemate has left Israel with a poorly functioning government for long periods of time.

Although Israel has won praise for its recent rollout of a successful coronavirus vaccine campaign, it has struggled to formulate coherent policies and been hobbled by the lack of a proper budget.

Once again, a caretaker government is set to assume power this week until a majority coalition is formed or new elections are held. Here's a glance at how its limited powers affect government rule:

Until a new government is sworn in after an election, the previous administration continues to serve in a caretaker role. Caretaker governments are only supposed to maintain the status quo and avoid making major policy decisions or moves that would hobble a future government.

Once the final election results are given to the figurehead president, Reuven Rivlin, he will have a week to tap the party with the best chance of building a coalition. That party has up to six weeks to build a 61-seat majority out of the disparate factions that won seats in the Knesset, Israel's parliament.

In the event no party manages to form a government — which was the case following 2019's back-to-back parliamentary elections — the Knesset is dissolved and new elections are called within three months. The caretaker government would continue to hold the reins.

The protracted deadlock saw a Netanyahu-led caretaker government hold onto power for a year and a half — from December 2018 until the formation of a national unity government in May 2020 — after two consecutive elections in 2019 proved inconclusive.

Eight parties were elected to the Knesset, Israel’s parliament, after the March 2020 vote, compared to the 13 that made the cut in this week’s election. Ofer Kenig, a research fellow at the Israel Democracy Institute, said the high degree of fragmentation in parliament “does not bode well for the chances of forming a stable government.”

One of the hallmarks of the extended deadlock is that Israel has not passed a national budget since March 2018. The unity government formed last year by Prime Minister Benjamin Netanyahu and his rival Benny Gantz collapsed in December because it did not pass a budget by a legally mandated deadline.

Last year, for instance, Israel's health care system struggled to cope with the coronavirus crisis and the government haphazardly approved assistance packages to workers and businesses as unemployment skyrocketed to over 20%.