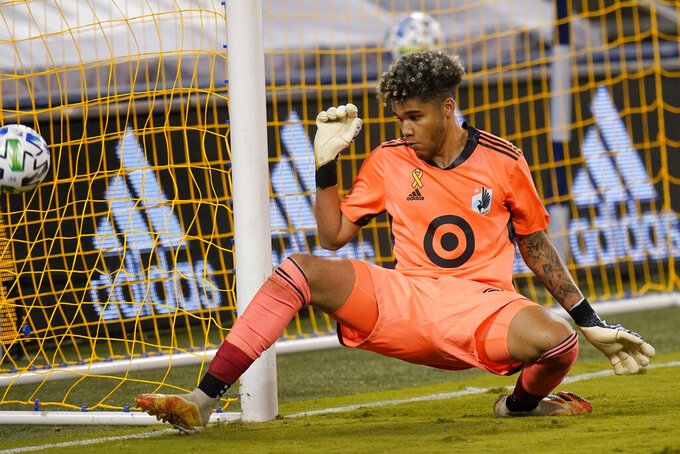 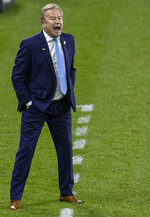 Adrian Heath says this is easily the most challenging season of his career.

The coronavirus shutdown, the MLS is Back tournament in a bubble, and now a spate of injuries are testing Minnesota's coach like never before.

The Loons had seven players, including five starters, on the injury list for last Sunday's 1-0 loss to Sporting Kansas City.

Two of Minnesota's top players are among those sidelined: defensive midfielder Osvaldo Alonso and center back Ike Opara, a two-time MLS Defender of the Year. Opara has an undisclosed condition and Alonso, the team's captain, has a hamstring injury.

Additionally, midfielder Ethan Finlay is nursing a knee injury and Luis Amarilla has an ankle injury. Aaron Schoenfeld trained Thursday and may be available as a sub for Minnesota's game at Houston on Saturday.

Goalkeeper Tyler Miller had hip surgery and will miss the rest of the season and backup Greg Ranjitsingh is set to have a procedure on his knee. To shore up the position, Minnesota acquired Adrian Zendejas in a trade with Nashville. Dayne St. Clair is the Loons' current starter in goal.

Minnesota is also thinking about picking up an additional striker.

“It’s been a difficult year, and certainly it hasn’t helped us with the amount of injuries that we’ve picked up to keep a stable team. So I’m hopeful we’re over the worst of that,” Heath said. "I think a few of the bodies will come back and we can get back to getting our strongest leg up on the field and moving on from there.”

Another issue is travel. The Loons have played just three games at home so far in the regular season, fewest in the league. The team is embarking on its next phase of games with two of three on the road, including Saturday's match against the Dynamo.

Complicating matters is a compact schedule: Sunday's loss to Kansas City was the team's sixth game in 24 days.

Minnesota is still sitting in third place in the Western Conference, behind Sporting and the Seattle Sounders.

The initiative is a partnership with the group Black Players for Change and the MLS players association.

MLS also announced that its league offices and all U.S.-based club facilities will be closed on Nov. 3, election day, to facilitate voting and encourage the league to get more involved in the voting process.

“Participation in local and national elections is one of the most important responsibilities we have as citizens. Major League Soccer and our players recognize the opportunity we have to leverage our platform to amplify the importance of voting,” Commissioner Don Garber said in a statement. “We hope to inspire MLS fans and the entire soccer community to educate themselves about the voting process, register to vote, and vote on Election Day.”

MLS also announced it is working with Power the Polls, a nonpartisan group that seeks to recruit young and diverse poll workers, as well as the Civic Alliance, a group of more than 200 business working to encourage voter participation.

MORE MOVES: The Seattle Sounders announced they signed Australian defender Brad Smith to a new contract Thursday. Smith spent the 2018 and 2019 seasons with Seattle on loan from English club Bournemouth and had eight assists in 35 appearances for the Sounders. He returned to England after Seattle won the MLS Cup last season and completed his contract while on loan to Cardiff City.

It's the sixth time brothers have connected for a goal in MLS play. The Charas join Cristian and Alex Roldan, Bradley and Shaun Wright-Phillips, Sean and Chris Henderson, and Jamar and DaMarcus Beasley, who combined on two goals.