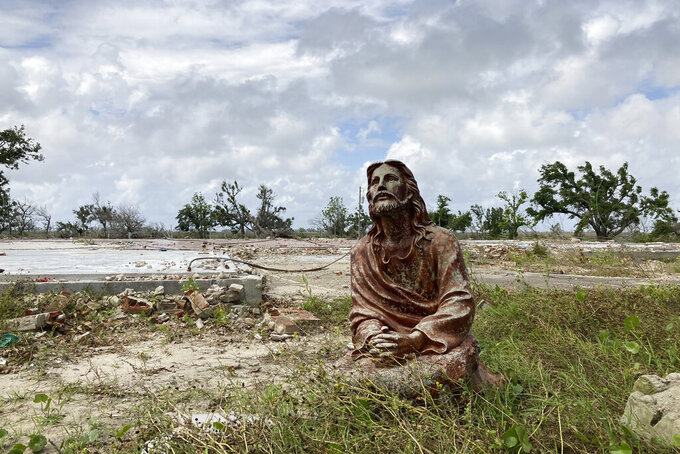 A statue of Jesus Christ stands in front of the remains of a house in Cameron Parish, La. on Monday, May 24, 2021. Scores of people in coastal Louisiana are still living in campers on dirt mounds or next to cement slabs where their houses once stood. Unresolved insurance claims and a shortage of supply and labor are stymying building efforts. And weather forecasters are warning of more possible devastation to come. (AP Photo/Rebecca Santana)

CAMERON, La. (AP) — Scores of people in coastal Louisiana are still living in campers on dirt mounds or next to cement slabs where their houses once stood. Unresolved insurance claims and a shortage of supply and labor are stymieing building efforts. And weather forecasters are warning of more possible devastation to come.

Nine months after two back-to-back hurricanes hammered their towns, residents are still struggling to recover — even as they brace for another onslaught of storms in the season that starts Tuesday.

“We’re scared to death for this next season,” said Clarence Dyson, who is staying with his wife and four kids in a 35-foot-long (11-meter-long) camper with bunk beds while the home they had been renting in Cameron Parish undergoes repairs after Hurricane Laura.

The parish — a Louisiana designation similar to a county — is made up of small communities on the southwestern coast where residents have lived for generations, either working in the shrimp industry or more recently at one of the area’s liquefied natural gas plants.

The region features a stunning, peaceful landscape where families go crabbing together, birds perch on swaying strands of marsh grass and wind-gnarled oak trees grow on the long ridges — called cheniers — that rise above the marsh. About 70% of the parish is wetlands or open water.

Last fall, however, the area was battered by hurricanes that carved a path of destruction. On Aug. 27, Category 4 Hurricane Laura rammed into the coast near the town of Cameron with maximum winds of 150 mph (241 kph). Just six weeks later, Hurricane Delta, carrying 97-mph (156-kph) winds, made landfall about 10 miles (16 kilometers) away.

Of the several communities hit, the towns of Cameron, Creole and Grand Chenier, in Cameron Parish, took the worst beating. Laura flattened homes, nearly gutted the First Baptist church, stripped trees of their branches and leaves and toppled power lines.

Nine months later, the parish's electric lines have been replaced by ramrod straight poles. Oak trees denuded of leaves and branches are started to sprout new growth. Piles of debris have been hauled away. And Booth’s Grocery Store, in business since 1957, is once again selling beer and bait.

But for most of the parish, recovery is still an ongoing process. Cement slabs and mounds of dirt still mark the place where homes used to be. The sounds synonymous with rebuilding — the whine of circular saws cutting lumber or nail guns hammering shingles — are rare.

Building contractors are in short supply; most are already slammed with work in the more densely populated, hurricane-damaged Lake Charles area farther north. Lumber prices have soared due to a trade dispute with Canada and a temporary shutdown in production when the coronavirus pandemic hit a year ago.

Leaders of the First Baptist Church in Cameron have been trying to get a contractor to come out and give them a quote so they can apply for a building permit. Most of the church has been gutted to the studs, with pews currently stacked in the building’s center. This is the fourth hurricane the small congregation has survived as well as one fire, said Cyndi Sellers, a longtime church member who was baptized and married there.

In the meantime, the small congregation holds services in the meeting room of the parish’s governing body. They try to soften the space with plastic sunflowers and a blue cloth across the podium. A cross with a Bible verse attached to it stands on a table.

Sellers has gone through quite a bit herself. As a young child, she took refuge in the Cameron Parish courthouse when Hurricane Audrey hit in 1957, and has seen many other storms in the more than 60 years since. Finally, after Laura, she and her husband had had enough and decided to move inland to a town about two hours away.

“The stress that you go through when there’s a storm in the Gulf, if you don’t live on the coast you can’t really imagine what it’s like,” she said.

Meanwhile, forecasters with the National Oceanic and Atmospheric Administration are predicting 13 to 20 named storms — six to 10 of which will become hurricanes and three to five of which will be major hurricanes — for this year's Atlantic season, which runs from June through November.

The stress of rebuilding and worry about future storms have prompted some to consider moving inland. But many who did just that after Hurricane Rita in 2005 were still unable to escape Laura’s wrath. The 2020 storm was so powerful, it was still a hurricane when it hit Shreveport about 200 miles (322 kilometers) north of the coast.

Clarence Dyson and his wife considered leaving but decided to stay — he is working at an LNG plant being built in Cameron. He also used to catch shrimp, but his boat was destroyed by Laura.

Federal officials just recently made it a little easier for residents to stay on their properties while they rebuild, by allowing the trailers it provides to be placed on lots that lie in the flood plain.

The movable living quarters can be seen everywhere, often parked near the cleared slabs and elevated mounds where houses used to be. Some residents intend to build something more permanent. But not 67-year-old Margaret Little. She plans to stay in a one-bedroom trailer that can be hooked to a truck and hauled away when the next hurricane comes.

Like Sellers, Little lived through Hurricane Audrey. She remembers holding on to a fence for dear life and how her dog had to fight off snakes when the family found refuge in a pump house.

Hurricane Rita took her nice brick house in Grand Chenier. Then Laura wiped out the trailer she’d bought to replace it. By the time Delta came, there was nothing left to take.

Little’s husband loves to crab and shrimp, and they have replanted the fruit trees they lost in Laura. But she draws the line at permanently rebuilding.