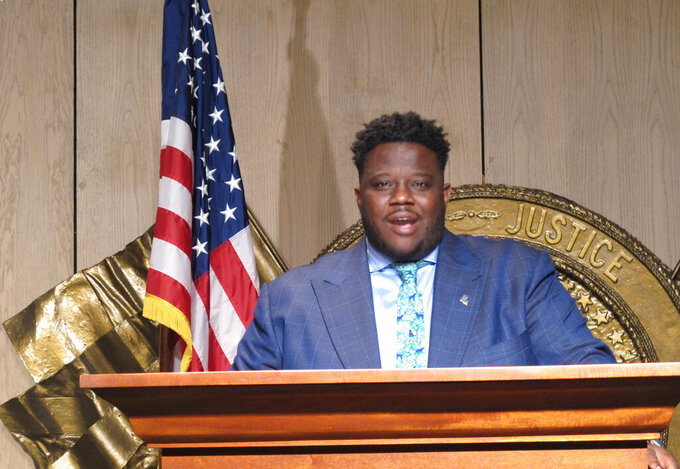 Publisher and community activist Gary Chambers Jr., D-Baton Rouge, speaks about his campaign for the 2nd Congressional District seat after signing up for the race on Wednesday, Jan. 20, 2021, in Baton Rouge, La. The seat is vacant because former U.S. Rep. Cedric Richmond resigned to work for the Biden administration. (AP Photo/Melinda Deslatte)

Thirteen contenders filed paperwork to appear on the ballot for the 5th District seat representing northeast and central Louisiana, a position that is open because Republican U.S. Rep.-elect Luke Letlow died from COVID-19 complications before he could be sworn into office.

Letlow's widow jumped into the race and will face several opponents her husband defeated in the fall election and a new candidate who is running for the seat from a jail cell while awaiting a retrial on a murder charge.

Julia Letlow, a Republican from Richland Parish, is running with the support of the last man to hold the congressional seat, Republican Ralph Abraham. Luke Letlow had been Abraham’s chief of staff and had Abraham’s backing for the job once he stepped down.

Also drawing attention is the entry into the race of Errol Victor Sr., a Republican and pastor who didn’t register for the ballot in person. WWL-TV reports Victor is in a central Louisiana jail awaiting a retrial on charges he killed his stepson in 2008, after his conviction was thrown out by the U.S. Supreme Court. The corrections department confirmed that Victor’s conviction was overturned and he was moved to the custody of St. John the Baptist Parish sheriff’s office ahead of the next trial.

Last fall’s third-place finisher, Sandra “Candy” Christophe, a social worker and Democrat from Alexandria, also has signed up to run again for the sprawling, largely rural district that covers all or part of 24 parishes, including the cities of Alexandria and Monroe.

Competing for the New Orleans-based 2nd District seat, a majority-minority district whose footprint reaches up along the Mississippi River into Baton Rouge, are 15 candidates.

They include two Democratic state senators from New Orleans, Troy Carter and Karen Carter Peterson; and Gary Chambers Jr., a Baton Rouge Democrat, community activist and local publisher who gained prominence during protests of the 2016 shooting death of Alton Sterling by local police.

The seat is open because Cedric Richmond, a Democrat who held the seat for more than five terms, resigned to work as a senior adviser in President Joe Biden's administration.

Also on the ballot is a special election for a seat on the state Board of Elementary and Secondary Education representing northwestern Louisiana. That race drew six candidates, including a former state senator and the wife of a current state House member.