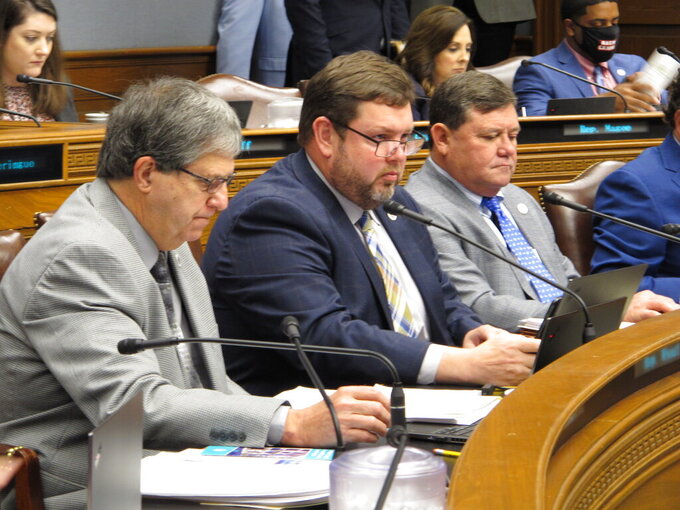 The House Appropriations Committee backed a more than $36 billion budget for the financial year that begins July 1 that would follow many recommendations submitted by Gov. John Bel Edwards and largely keep state agencies at standstill or slightly increased spending levels.

Among the increases, foster parents would receive larger payments for the care they provide, salaries for K-12 public school teachers and college faculty would increase and full tuition would be covered for all eligible students in the TOPS program.

“Education is one area we know needs our attention, and with this funding, we can finally start to fill requests," Republican House Speaker Clay Schexnayder said in a statement. "Our teachers are the pillars of our education system, and it's time we give them the pay raises they need.”

The higher education raises would vary, but elementary and secondary school teachers would get $800 pay raises while school support staff would receive $400 increases. Those are double the amounts proposed by the Democratic governor — but fall short of the $1,000 teacher salary hikes and $500 support worker raises that legislative leaders promised.

Appropriations Chairman Jerome “Zee” Zeringue, a Houma Republican, said lawmakers anticipate the state will have an improved tax collection forecast later this month, and they'll use some of that money to add into the budget to increase the raises to the $1,000 and $500 amounts promised.

The full House will debate the package of budget bills Thursday.

The proposal crafted by Republican House leaders behind closed doors and unveiled Monday also would spend hundreds of millions in new federal coronavirus aid approved by Democrats in Congress.

Of the federal cash, $400 million would be sent to the state's bankrupt unemployment trust fund to help pay jobless benefits rather than using federal loans. Lawmakers would steer $300 million to water system upgrades, $90 million to expand broadband access, $10 million for logging industry assistance and $4.5M for grants to movie theater operators who lost money during the pandemic.

Another $800 million in federal aid would be steered to a fund for lawmakers to decide how to spend later.

“We'll wait for the final (federal) guidance before we start allocating the dollars,” Zeringue said.

The proposals deviated from some of Edwards' recommendations for spending the federal cash. The governor's chief budget adviser, Commissioner of Administration Jay Dardenne, worried that singling out the timber industry and movie theaters for special carve-outs would start a flood of requests from different industries.

“If you start trying to make everybody happy ... you’re going to dilute the effectiveness of the money,” Dardenne told the committee.

Lawmakers propose spending better-than-expected tax collections from this year for Louisiana's share of recovery expenses from last year's hurricanes and this year's winter storms and legal judgments against the state. Some of the money would pay the first $45 million toward Louisiana's debt to the federal government for flood protection system upgrades in the New Orleans area.

Meanwhile, lawmakers are proposing to earmark about $25 million in unspent cash from the current budget year to their favored local projects. Those include $1.9 million to the St. Bernard Parish Sheriff's Office, $1 million to a Terrebonne Parish elementary school, $400,000 for Ruston city hall upgrades, $200,000 for a seafood festival in Jean Lafitte and $200,000 for zoo improvements in Baton Rouge. The committee didn't discuss those pet projects.

Spending on legislative and judicial agencies also would increase in the upcoming financial year.

Though GOP lawmakers had raised concerns about using short-term federal aid for ongoing state operations, the Appropriations Committee retained Edwards' plan to use $600 million in increased federal Medicaid money available for the pandemic to balance next year's budget.

The governor and lawmakers will have to find other dollars to fill the gap in later years when the federal aid disappears or make cuts to programs and services.