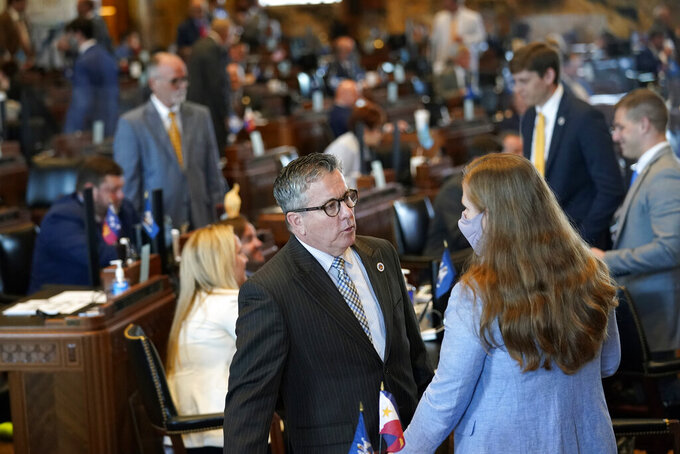 BATON ROUGE, La. (AP) — The Louisiana House on Thursday overwhelmingly backed a $36.4 billion operating budget for next year, packed with pay raises for teachers, college professors and corrections workers as the state faces few of the financial woes of prior years amid an influx of federal coronavirus aid.

Beyond next year's budget, lawmakers also passed measures to spend about $925 million in one-time federal coronavirus relief on infrastructure projects and aid programs, and divvied up better-than-expected tax collections from the current financial year to disaster recovery, debt payments and lawmakers' favored projects.

The budget "reflects in these trying times an opportunity to move in the best interest of the state while acknowledging the challenges that we do have,” said Appropriations Chairman Jerome “Zee” Zeringue, the Houma Republican handling the budget in the House.

In the financial year that begins July 1, spending on health care and education programs would grow, and most other agencies would largely keep standstill funding. Louisiana's TOPS college program would cover full tuition for eligible students, while need-based aid for college students through the Go Grant program would increase.

Public school teachers would get an $800 pay raise, while support workers such as bus drivers and cafeteria employees would see their salaries rise by $400. College faculty would receive salary hikes, and the corrections department would boost pay for its prison guards in an effort to reduce staff turnover. Payments to foster parents would increase.

The package of budget bills — passed in fewer than three hours — heads to the Senate for debate. A deal between the two chambers isn't expected until the final days of the legislative session in June.

The state operating budget, passed with a 101-1 vote, is balanced with $720 million in short-term cash that isn't expected to be available in later years, including $600 million in enhanced federal Medicaid money available because of the coronavirus pandemic.

Combined with other budget measures, the state would spend $42 billion on programs and services in the 2021-22 financial year. Spending on legislative and judicial operations, allocated through separate budget bills, would grow larger, and judges would get another year of a multiyear pay raise.

About $25 million of the unspent cash remaining from the current budget year would go to local pet projects that received no public discussion from lawmakers.

Among the pages of earmarks are $1.9 million for the St. Bernard Parish Sheriff's Office, $400,000 to the town of Erath for a utility substation, $250,000 for a food bank that serves New Orleans and Acadiana, $500,000 to a Baton Rouge cancer center for equipment, $1 million to St. Martin Parish for a land purchase and $900,000 for economic development projects in Houma.

Rep. Brett Geymann, a Lake Charles Republican, was the only vote against the operating budget. Lawmakers rejected his effort to limit additional budget growth if the state income forecast increases, as expected. Geymann wanted to steer most of any new dollars that might arrive to one-time projects and debt payments.

“We have plenty of money now. This budget right now is in a good posture,” Geymann said.

Legislative leaders opposed the effort, and 61 lawmakers voted against Geymann's proposal. Only 34 backed it.

Many of the questions during Thursday's budget debate involved federal pandemic relief allocated in a separate bill. The House plan spends $925 million of more than $3 billion that is expected to flow to the state.

The proposal would steer $400 million to the state's bankrupt unemployment trust fund, $300 million to water system upgrades, $90 million to broadband expansion, $55 million to ports, $50 million to grants for small businesses and nonprofits, $10 million for the logging industry and $4.5 million for movie theater operators. Another $15 million would pay for technology upgrades at the Louisiana Capitol, even though lawmakers are sitting on their own unspent surplus.

While many of the spending plans in the operating budget follow the recommendations of Gov. John Bel Edwards, the House deviated from the Democratic governor's suggestions for using the federal cash. Edwards wanted dollars for tourism marketing and other areas that the House didn't include.