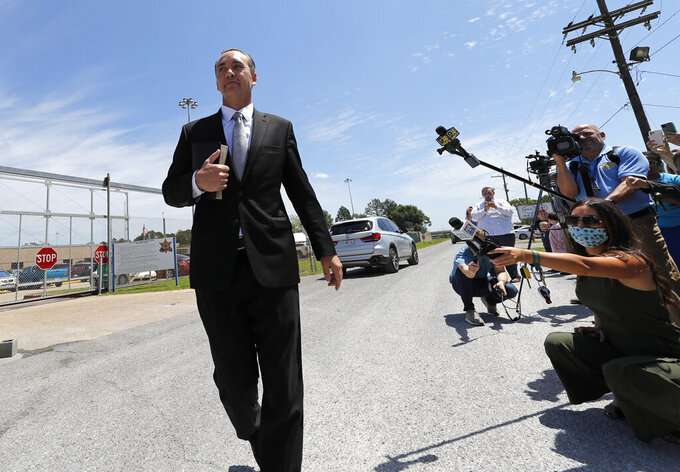 Tony Spell, pastor of the Life Tabernacle Church, walks to his church bus as he leaves East Baton Rouge Parish jail after posting bond in Baton Rouge, La., Tuesday, April 21, 2020. Louisiana authorities arrested the pastor on an assault charge on Tuesday after he admitted that he drove his church bus toward a man who has been protesting his decision to hold mass gatherings in defiance of public health orders during the coronavirus pandemic. (AP Photo/Gerald Herbert)

BATON ROUGE, La. (AP) — A Louisiana minister is suing state and local officials, claiming they threatened and harassed him about the state's COVID-19 pandemic ban on large gatherings.

Tony Spell also claims that his phone was tapped and a camera illegally installed at his home, and that he was followed, The Advocate reported.

Spell repeatedly flouted the ban against gatherings of more than 10 people at his Life Tabernacle Church in the Baton Rouge suburb of Central, and was arrested after backing a church bus toward a protester on the roadside.

Several agencies named in the suit denied the allegations in the civil rights lawsuit filed Thursday in federal court in Baton Rouge.

“I have no clue where he’s come up with that his phones were tapped,” Central Police Chief Roger Corcoran told the newspaper; nor were his officers following Spell or videorecording the church, he said.

The suit accuses Crifasi of telling Spell and an attorney that his bail conditions forbade preaching to his church assembly. The judge's attorney, Mary Olive Pierson, disputed that claim and said judges are legally immune to this sort of suit.

Spell’s suit claims the emergency order against gatherings of more than 10 people violates his and his congregation's rights to freedom of speech and religion. It also alleges that businesses allowed to stay open let in much bigger crowds with little effort to enforce social distancing.

“If Pastor Spell told his congregation to meet at Home Depot, Lowe’s, or Walmart, then he apparently would not have been violating the Governor’s orders, but since he told them to meet at Life Tabernacle Church, he is facing fines and possible imprisonment,” the suit claims.

In a Friday ruling denying Spell's request for a temporary restraining order against Edwards' stay-at-home order, U.S. District Judge Brian Jackson wrote that, “Plaintiff’s conclusory statement fails to demonstrate that their rights, which are not absolute, outweigh the lives and health of Louisiana’s population."

Edwards has said that the Baton Rouge area is among those where a rising trend of cases and hospitalizations have kept him from making more than minor changes to his stay-at-home order, although statewide rates are declining.

“As both a lawyer and a man of strong faith, Governor Edwards carefully issued his Stay at Home order to put in reasonable mitigation measures that allowed for worship while still protecting the public’s health,” Edwards’ Executive Counsel Matthew Block said in a statement in response to Jackson's ruling.

Edwards' current order, which also closed many “nonessential” businesses, expires Friday. Edwards is to announce Monday whether the restrictions will be extended or if a phased reopening of businesses can begin on May 16.

As of Friday night, the state had reported more than 33,800 cases of the of the novel coronavirus, including at least 2,382 deaths.

For most people, the coronavirus causes mild or moderate symptoms. For others, the highly contagious virus can cause severe symptoms and be fatal.