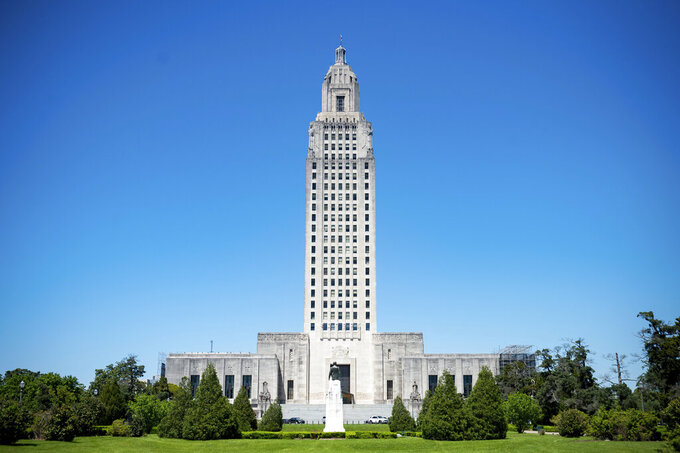 BATON ROUGE, La. (AP) — Despite the coronavirus outbreak, the Louisiana Legislature opened a regular session Monday that seems more like those of pre-pandemic times, with debates planned on taxes, sports betting, transgender rights and other issues far beyond the virus' aftermath.

Gov. John Bel Edwards didn't give the traditional session speech in the House chamber because of concerns about tight spacing. Instead, he spoke Monday evening at Southern University’s open-air stadium to a small crowd that included some legislators.

While lawmakers are moving past the pandemic, the Democratic governor’s speech focused heavily on COVID-19, which Edwards called the third leading cause of death in Louisiana last year. The governor encouraged people to get vaccinated and said the state needs to tackle health inequities underscored by events of the past year.

“Like you, I want Mardi Gras parades to roll again. I want festivals to resume,” Edwards said. “But I don't want post-pandemic Louisiana to look completely like pre-pandemic Louisiana, nor should it. Because we can do better.”

Lawmakers will haggle over some COVID-19 topics, such as whether to curb the governor's emergency response authority and possible bans on vaccination mandates. They'll also try to decide how to divvy up more than $3 billion in new federal coronavirus aid heading to Louisiana.

But the agenda for the two-month gathering is broad, as lawmakers saw session plans last year disrupted by the pandemic.

“A lot of people have a pent-up demand,” said Sen. Fred Mills, a Republican from St. Martin Parish. He noted many issues are contentious: “It’ll be like cage wrestling.”

Senate President Page Cortez and House Speaker Clay Schexnayder, both Republicans, are promoting a sweeping tax rewrite they say is aimed at simplifying the state's tax laws and attracting business.

“The goal of the tax reform is to move Louisiana up on lists, make us a more business-friendly state, stop the outmigration,” said Cortez, of Lafayette.

Similar efforts have been tried and failed in prior years. Edwards said he's open to the idea if the majority-GOP Legislature doesn't shrink the amount of money coming into state coffers with the overhaul. The governor faced steep shortfalls in his first term, closed with passage of a temporary sales tax that expires in mid-2025.

“No one wants to go back to the fiscal mess that I inherited and that we all had to deal with," Edwards said. "And, quite frankly, I won't let that happen."

The Louisiana Capitol is reopened to the public, but masks and temperature checks are required, seating in the House and Senate chambers is limited and caps are placed on the size of groups touring the building.

Lawmakers, however, often don't comply with the statewide mask mandate or distancing suggestions, and some of the after-hours receptions and parties of the pre-pandemic legislative sessions are returning.

Even amid the virus outbreak, Louisiana doesn’t have the budget shortfalls of years past, thanks in part to federal coronavirus aid. Edwards is asking lawmakers in his $36 billion budget proposal to give public school teachers and college faculty a pay raise. He hasn't outlined detailed recommendations yet for spending the $3 billion in additional federal assistance on the way.

Sen. Cameron Henry, a Jefferson Parish Republican, said his priority “is to make sure we pass a budget that addresses all the state’s needs, but that doesn’t put us in a hole in the future.” He opposes using one-time federal cash for ongoing programs.

Female lawmakers are enraged by an independent report documenting widespread mishandling of sexual misconduct claims by Louisiana State University. They want to pass new requirements for responding to such allegations and secure a firing mandate for those who fail to report incidents.

“We want to ensure that this never happens again,” said Sen. Regina Barrow, the Baton Rouge Democrat whose committee has held repeated hearings on the report.

Some lawmakers will take aim at law enforcement tactics amid the national discussion about racial bias in policing, a debate that's moved close to home with allegations of improper behavior involving the Louisiana State Police.

A task force that studied the issue recommended changes to the handling of complaints against police officers, new limits on chokeholds and no-knock warrants, requirements for anti-bias training and reduction of certain legal protections for law enforcement, among other ideas.

“We have local issues that we could point to that highlight the need to make these changes. Nobody can run from those,” said Baton Rouge Rep. Ted James, a Democrat who leads the Legislative Black Caucus.

The session must end by June 10.