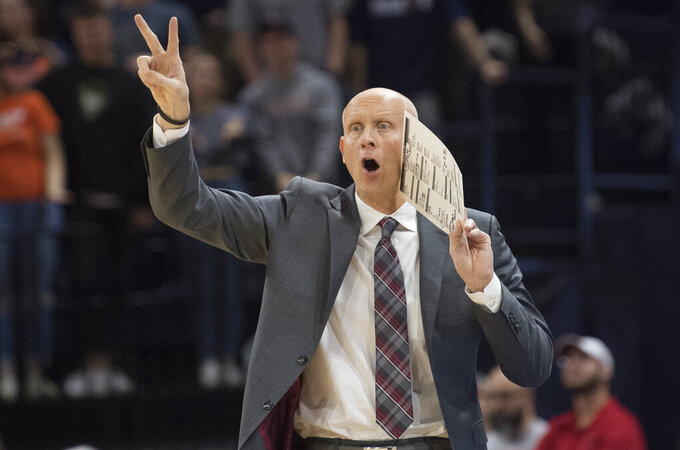 Louisville head basketball coach Chris Mack signal his next play to his team during the second half of an NCAA college basketball game against Virginia in Charlottesville, Va., Saturday, March 7, 2020. (AP Photo/Lee Luther Jr.)

Tyra said during a conference call on Thursday that his department aims to trim about $15 million from the proposed 2020-21 budget. That includes 10% salary reductions for men’s basketball coach Chris Mack, football coach Scott Satterfield, women’s basketball coach Jeff Walz and baseball coach Dan McDonnell, whose combined salaries for next year total about $10 million, the AD said. Tyra added that cuts were being discussed in other areas but did not provide any details.

The AD also said he will forego his $150,000 bonus the next two years and other compensation. Tyra added that some coaches voluntarily cut their salaries, with contracts amended to reflect the reductions — though he did not say which coaches. Louisville's athletic department has also imposed a hiring freeze and despite the savings is considering other cuts, including furloughs.

“These are difficult decisions , but you’ve got to make them,” Tyra said. “You’ve got to be fearless to make the right decision here. ... We may be on buses more than teams like. Incidental meals, just trimming of things we’ve been able to do. Everything is under review right now.”