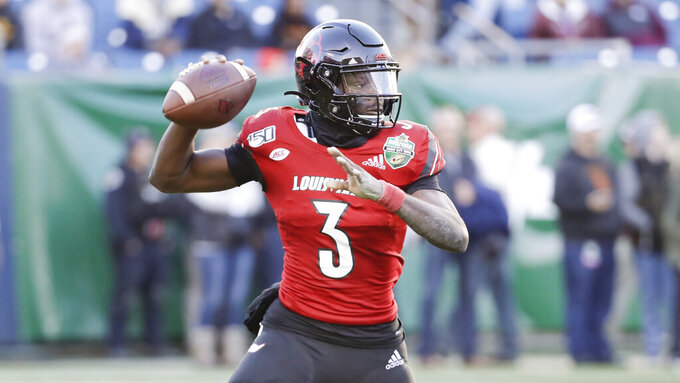 FILE - Louisville quarterback Micale Cunningham (3) plays against Mississippi State in the Music City Bowl NCAA college football game Monday, Dec. 30, 2019, in Nashville, Tenn. Last August, Micale Cunningham was recovering from a preseason knee injury that put him behind Jawon Pass on the depth chart. He returned to replace an injured Pass at midseason and didn't look back, passing for 2,065 yards and 22 TDs in 11 starts. (AP Photo/Mark Humphrey, File)

Initially looking to rebuild from a dismal two-win 2018 campaign that forced a coaching change, the Cardinals quickly became respectable and competitive in Scott Satterfield’s first year as coach. They went 8-5 and won the Music City Bowl behind a quick, balanced offense that lit up the stat sheet and scoreboard. More impressively, they won five of their final seven Atlantic Coast Conference contests after dropping the previous nine over two seasons.

Work remains, especially on defense, but the Cardinals aim to continue progressing.

“Last year people were counting us out to be last,” said sophomore wide receiver Tutu Atwell, who caught 60 passes for 1,125 yards and 12 touchdowns. “That was motivation. We had a good season, and this year we see what we can do.”

Depth on both sides of the ball has helped spark that optimism.

The offense-minded Satterfield enters Year 2 with 18 starters back, including 10 on an offense averaged nearly 33 points per contest last fall. The highlight was a 62-59 shootout win at Wake Forest that symbolized his up-tempo approach.

On the other hand, the Cardinals’ new 3-4 defensive scheme yielded nearly a point more per game and ranked 102nd nationally (439.9 yards per game) of 130 Division I schools in total defense. The upside is having coordinator Bryan Brown back for a second season, continuity they believe will result in improvement.

“There would always be that one little play or that one missed assignment that just overshadowed the good things," said senior inside linebacker Dorian Etheridge, "This year, with all that experience we have, it’s going to be one of those things where we can really be special.”

Like last year, Louisville began spring drills in late February, this time with the euphoria of a bowl win still fresh in their minds.

The Cardinals registered seven workouts before the coronavirus pandemic shut things down. Players and Satterfield believe that was enough time to reinforce things, and their mission now is meeting significantly higher expectations.

“We've got a great group coming back and we want to prove that what we did last year wasn’t a fluke, that this year could be something special," said Satterfield, who was named ACC Coach of the Year by coaches and media members.

“We want to be picked as the team that’s going to be a contender not only in our league, but nationally.”

Other things to watch as Louisville seeks consecutive winning seasons:

Last August, Micale Cunningham was recovering from a preseason knee injury that put him behind Jawon Pass on the depth chart. He returned to replace an injured Pass at midseason and didn't look back, passing for 2,065 yards and 22 TDs in 11 starts. He set a school record for passing efficiency (194.5) along the way and earned Music City Bowl MVP honors.

Atwell and running back Javian Hawkins, both 5 foot 9, return after each surpassed 1,000 yards. Atwell emerged as the big-play guy and deep threat while Hawkins provided Louisville’s first 1,000-yard rusher since Harry Douglas (1,159) in 2007. Receiver Dez Fitzpatrick (598 yards, 6 TDs) provides another passing target and RB Hassan Hall is coming off a career-best 501 yards rushing.

The departure of left tackle and first-round NFL draft pick Mekhi Becton left an opening up front that 6-5, 310-pound Adonis Boone will try to fill. He started two of the final four contests and could join a senior trio of Robbie Bell, Cole Bentley and Caleb Chandler. Special teams sustained the biggest losses with the departures of kicker Blanton Creque and punter Mason King, leading to open competition at both positions among a large group of hopefuls.

Four Louisville players have tested positive this summer but the team hasn't lost any practice days to the coronavirus. Tests are conducted weekly and players and staff have boasted about the program's diligence in following protocols, particularly in a city and state where infection rates have recently spiked.

Louisville opens Sept. 12 against in-state rival Western Kentucky as its lone non-conference game. The revamped ACC docket to 10 games cost the Cardinals a marquee home matchup against favorite Clemson, but they gained a chance for revenge at home against Miami, which drilled them 52-27 last fall. They also retained meetings at temporary ACC member Notre Dame and against Virginia Tech.