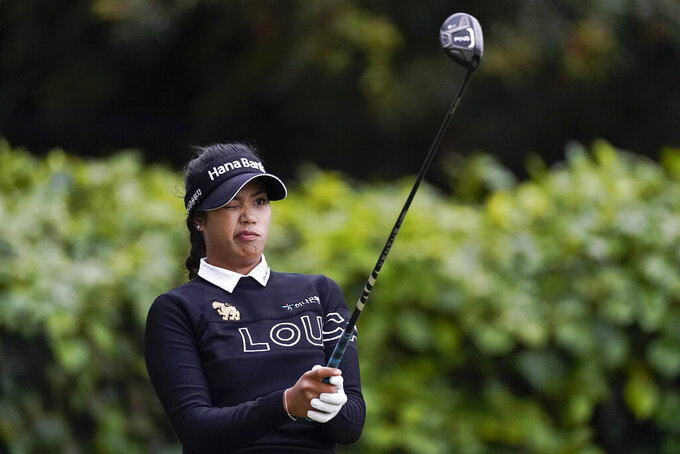 Patty Tavatanakit lines up her shot at the 10th tee during the second round of the LPGA's Hugel-Air Premia LA Open golf tournament at Wilshire Country Club Thursday, April 22, 2021, in Los Angeles. (AP Photo/Ashley Landis)

PATTAYA, Thailand (AP) — Patty Tavatanakit struggled on the front nine but will take a one-shot lead over fellow Thai Atthaya Thitikul and German Caroline Masson into final round of the LPGA Thailand tournament.

Tavatanakit recovered from her slow start to shoot a 2-under 70 in the third round at Siam Country Club on Saturday.

After back-to-back 64s, Tavatanakit bogeyed on the fourth and ninth after a birdie on the second. She recovered with birdies on the 14th and 15th and fought back from the bunker on the final hole for her fourth birdie. She moved to 18-under 198.

“I'm not expecting to have a perfect tournament.” Tavatanakit said. “Even though I had some nice rounds, it was still not perfect, which I feel like it’s the nature of the game itself. I’m really proud of myself of how I hung in there and grinded back to shooting under par.”

Tavatanakit and 18-year-old Thitikul are playing under high home expectations despite no crowds due to the pandemic. The 21-year-old Tavatanakit became Thailand’s new leading female golfer following her breakthrough win at the ANA Inspiration major last month.

The 21-year-old Tavatanakit will keep her eyes fixed on winning her second LPGA title. A Thai player has never won this event.

“I don't have to be perfect to win tomorrow, but still it's going to be tough,” said Tavatanakit, whose full first name is Paphangkorn. "I got to be mentally prepared for whatever is coming tomorrow. Like ANA, it’s not going to be easy. There will be some challenges. Going to be people shooting low numbers.

“I just can’t let that affect me at all,” she continued. “All I got to do is play my best, and whatever outcome it is, I’ll still be super proud of myself for having really good three rounds already.”

Playing her first international event as a pro, Thitikul (68) also shook off a sluggish start with two bogeys in three holes to shoot six birdies, four after the turn.

"I didn’t get off to a great start, so I just told myself to hang in there,” said Thitikul, who won two Ladies European Tour titles in Pattaya, at another course, in 2017 and 2019 when she was still an amateur.

With the growing local expectations for a Thai champion, Thitikul will try to keep that out of her mind and focus on her routine.

"I will go to the final round focusing on how well I can apply what I have been training for on the greens. Whatever people expect from me, I won’t let that bother me,” the teenager said.

Masson (67) carded seven birdies against two bogeys to join Thitikul in second place. Masson will be aiming to win her second LPGA title after the 2016 Manulife LPGA Classic in Ontario.

"For me to have a chance to win, I have to keep making putts and birdies and try to go as low as I can,” she said.

The former top-ranked Lydia Ko (67) of New Zealand and Gaby Lopez (67) of Mexico were both two shots off the lead after three rounds.