LSU looks to bounce back when defending champs visit Vandy 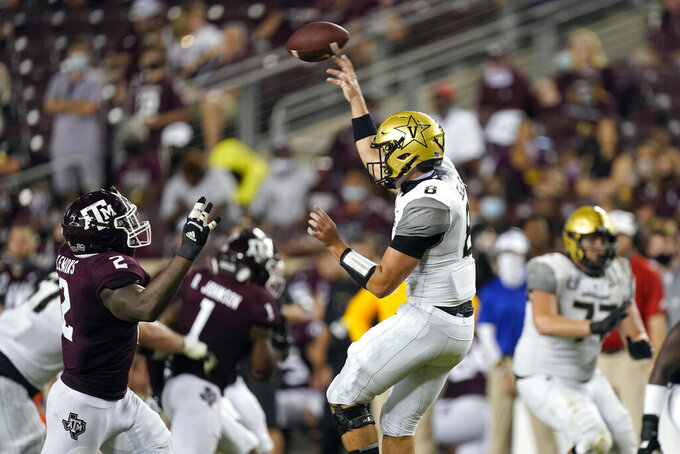 NASHVILLE, Tenn. (AP) — The LSU Tigers received a rude wake-up call: Their national championship season is over and they can't take anything for granted.

“We can’t go through the motions in a practice or through film,” LSU center Liam Shanahan said. "We have to really be attacking everything that we do every single day to make sure that we’re ready on Saturdays to be the best team that we can be.”

The Tigers found themselves humbled with a 44-34 loss on their own field to Mississippi State. The loss dropped them from sixth to No. 20 in the national rankings. In what could be a timely move for the Tigers, the Southeastern Conference's pandemic-forced schedule changes has them hitting the road to play Vanderbilt in Nashville for a second straight year.

LSU has an eight-game winning streak over Vanderbilt, including a 66-38 rout a year ago.

Safety Jacoby Stevens, a Nashville native, says the Tigers won't be harping on what happened in the opener.

“Going back home is always special ...," Stevens said. "As a team we’re looking to repeat what we did last year in that stadium. We went in and we dominated.”

Vanderbilt (0-1) is a much different team than a year ago. Coach Derek Mason changed out his coordinators and a handful of assistants, and no quarterback remains from 2019. Freshman Ken Seals got the start on the road in his native Texas as Vanderbilt lost 17-12 to then-No. 10 Texas A&M.

“LSU and coach (Ed) Orgeron will come in here ready to play,” Mason said. “What we've got to do is finish our preparations and make sure we line up and play football.”

LSU sounded relieved to have Derek Stingley Jr. back in the fold this week after struggling against the pass in the opener. Stingley missed LSU’s loss after suddenly falling ill and being hospitalized the night before the game. He was discharged from the hospital Saturday and was back at practice this week.

“We were missing one of the best if not the best corner in the nation Saturday so, always, getting him back is a positive,” Stevens said. “When you lose somebody like that it’s always a big deal. He’s a proven guy and I still feel like this year there are going to be times when teams are not even going to test Derek, so in that case he’ll shut down a half or a third of the field.”

LSU also anticipates the return of 6-1 defensive back Jay Ward, who Stevens said he considers “one of the top nickels or one of the top DBs in the SEC.”

Vanderbilt forced five fumbles in its opener and recovered three. That was an impressive performance considering the Commodores only recovered four fumbles while forcing 11 takeaways all of 2019. Defensive tackle Daevion Davis said they have a mindset this season.

“The ball is everything,” Davis said. “We focus on that all day every day. We were just screaming it at practice (Tuesday). We don’t go without the ball. So we got to keep a focus on that and continue to work our technique and punching at the ball so people can give it back to us.”

Shanahan, a graduate transfer from Harvard, is one of four new starters on an offensive line that has been taking a hard look at itself this week. Not only was Brennan sacked seven times by Mississippi State, his arm was hit by a pass rusher as he threw an interception.

Mason was pleased by what he saw out of Vanderbilt's offense under new coordinator Todd Fitch and his new quarterback. Seals threw for 150 yards, and the Commodores held the ball for nearly 34 minutes. Mason said Seals still has plenty to improve on.

“As he continues to play, he's only going to get better," Mason said.

A year ago, so many LSU fans were on hand that concessions ran out of beer during the game. No tickets were sold for this game, but Vanderbilt is testing having people inside the stadium by allowing a limited number of students.

Mason said seniors will be allowed in as Vanderbilt works to ramp up hoping to eventually have families of players and coaches along with fans in the stands.