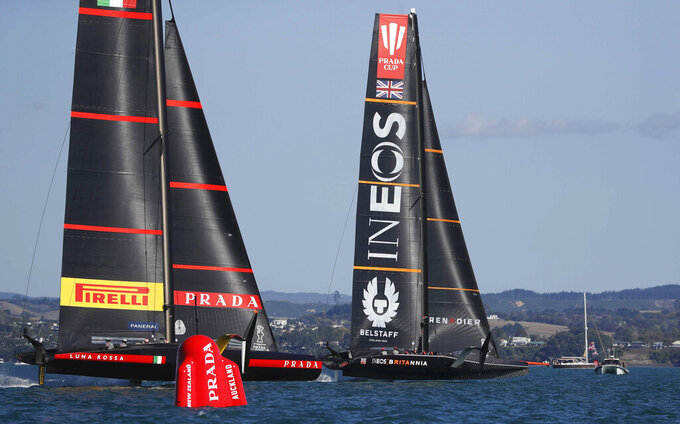 After a week of storms ashore Ineos Team UK won one of two races sailed in a shifting breeze Saturday to raise the faint hint of a comeback in the America’s Cup challenger series final against Luna Rossa Prada Pirelli.

As racing resumed after a week’s delay, Luna Rossa won the fifth race of the Prada Cup final by 1 minute, 20 seconds to lead 5-0 in the first-to-seven series. Faced with the possibility of match point, Team UK expertly called the shifts to win the second race by 14 seconds and keep the series alive after six races.

Two races on Sunday will decide whether Britain’s Team UK continues in the series or whether Italy’s Luna Rossa wins its way into next month’s America’s Cup match against defender Emirates Team New Zealand.

“No high fives yet,” Luna Rossa co-helmsman Francesco Bruni said after the first race of the day with the prescience of a sailor who knows nothing can be taken for granted in the America’s Cup. In 2013 Oracle Team USA came from 8-1 down in the Cup match to beat Team New Zealand 9-8 in one of the great comebacks in sport.

All the evidence of Saturday’s racing seemed to suggest, and British skipper Sir Ben Ainslie admitted, Luna Rossa is faster than Team UK’s Britannia in a straight line in light winds. But the second race of the day showed the advantage held by a leading boat: Team UK was ahead at the first cross for the first first time in the series and, sailed flawlessly, was able to stay there.

“The guys did a great job," Ainslie said. "They’re not going to give up these boys, they’re going to keep fighting all the way.”

Team UK wasn’t happy to be racing Saturday in mostly light winds which favored its opponent and its win was more impressive in those circumstances.

“I think, and most people can see, that at 13 knots and above the boats are pretty even,” Ainslie said. “But underneath that we struggle.

“They know it, we know it and that’s the challenge we’re up again.”

Luna Rossa, which controls the Prada Cup as the Challenger of Record, had the ability to demand racing resume after a week-long break due to a small community outbreak of COVID-19 in Auckland which pushed the city to Alert Level 3, at which racing generally can’t take place.

When Auckland moved to Alert Level 2 at midnight Wednesday, Luna Rossa was eager to immediately get back on the water. But it was opposed by regatta organizers America’s Cup Events Ltd., which only reluctantly accepted a resumption on Saturday.

In a bitter and angry dispute, ACE accused Luna Rossa of poor sportsmanship and of failing to honor and respect New Zealanders who have funded the event and whose effort in limiting community spread of the coronavirus made it possible.

Luna Rossa insisted that racing was permitted at Level 2 and should go ahead, though Team UK suggested it acted out of self-interest because it knew conditions Saturday would be light.

The first race started in around eight to 10 knots. Ainslie was especially aggressive in the pre-start as Team UK wanted the windward end of the start line and the right hand side of the course. Luna Rossa sought to shut it out and in the tussle both boats were over the line early.

Those penalties canceled each other out but Team UK was contentiously penalized again for encroaching on the exclusion zone around Prada. When the boats crossed for the first time on the first leg, Luna Rossa tacked on Team UK’s lee bow but Britannia edged just ahead.

The umpires insisted Team UK discharge its penalty, which meant it gave up its slight lead, and when it did so Luna Rossa took charge of the race and led by increasing margins at every mark.

“We’re obviously struggling in terms of straight line performance so we have to push it hard to make something happen,” Ainslie said. “I guess we just fouled out (at the start). It must have been pretty close.

“We got the first cross but they were just sailing away from us with extra speed upwind.”

Ainslie pushed hard again in the pre-start for the second race and crossed the line just ahead. For the first time, Team UK’s race boat Britannia was ahead at the first cross and able to lee bow Luna Rossa.

With Ainslie and tactician Giles Scott calling the shifts, Team UK led around all marks, including by 34 seconds at the fourth gate. Luna Rossa cut that to nine seconds at the final mark but Britannia held on.

“It was a great race,” Luna Rossa co-helmsman James Spithill said. “Full credit to Ineos for getting that one.

“It’s always one race at a time and you never think about the end result."