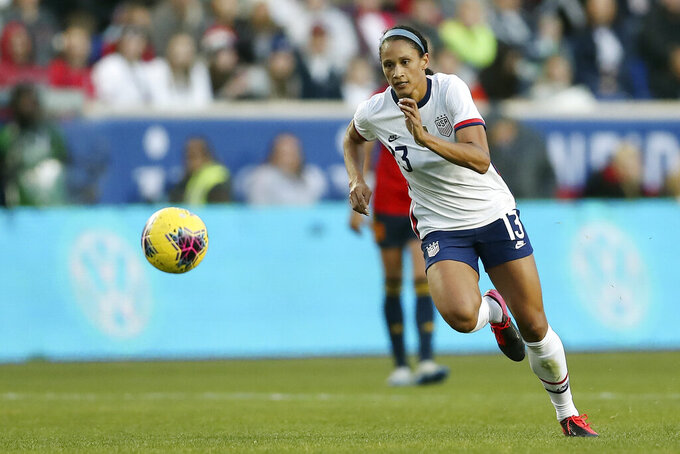 FILE - In this March 8, 2020, file photo, United States forward Lynn Williams (13) chases after the ball during the second half of a SheBelieves Cup soccer match against Spain in Harrison, N.J. Williams had her momentum with the U.S. national team stalled by the coronavirus pandemic. She was hoping to earn a spot on the Olympic team this past summer. But the one-year delay has given her time to work on different aspects of her game. (AP Photo/Steve Luciano, File)

Lynn Williams was on a roll, soccer-wise.

It started last year about this time. She had helped her club team, the North Carolina Courage, win its second straight National Women's Soccer League title, then she did well in a pair of friendlies with the U.S. national team — including scoring two goals in a 6-0 win over Costa Rica.

She opened 2020 by earning a spot on the team's Olympic qualifying roster, then scored three goals during the competition, including a goal and two assists in the final against Canada.

With Alex Morgan out on pregnancy leave, qualifying and the SheBelieves Cup in March gave the 27-year-old Williams a chance to shine.

She was well on her way toward proving herself worthy of a spot on the Olympic team after failing to make last year’s World Cup-winning team. She looked to Crystal Dunn, who was left off the 2015 World Cup squad but went to the Olympics in Brazil and assumed a starting role with the team.

Then all that momentum seemed to stop because of coronavirus.

“Obviously I didn’t go to the World Cup, missed out on that, and in my head, I’m like, 'Can I pull a Crystal Dunn? Can I make it back and go to the Olympics?' And I felt like I was on that path to do that and had a great chance — not that I don’t still, I’m obviously still working toward it. But it was definitely disappointing to know that the Olympics were pushed back,” Williams said.

“At the end of the day, I think we have to look big picture," she added. "For me, it was now we have a year to prepare and I have a year to work on things that maybe I was rushing to work on.”

This year, Williams has made seven appearances and four starts for the national team, with three goals and five assists.

Williams just wrapped up camp with the national team this week. The group sequestered in Commerce City, Colorado, for 11 days. It was the first time the team had been together in some seven months.

The camp came after the conclusion of the NWSL's fall series. The league, which suspended the season in March because of the coronavirus, held a tournament in a bubble in Utah this summer before returning to local markets. Teams played four regional games.

Because the competition was limited, some of the national team's stars went overseas to play in Europe. Among them were Tobin Heath, Christen Press, Alex Morgan, Emily Sonnett, Sam Mewis and Rose Lavelle.

Williams stayed in the United States. She scored three goals for North Carolina during the fall series after scoring three goals during the Challenge Cup tournament.

A native of Fresno, California, Williams played at Pepperdine before becoming a consistent performer in the NWSL. She was named the 2016 Most Valuable Player, and since then has ranked among the league's top scorers.

Despite this, she never really caught on with the national team under Jill Ellis. That changed when Ellis stepped down and Vlatko Andonovski took over. Williams has great respect for Andonovski, who coached in the NWSL before taking over the U.S. team.

“Credit to him, when we were in the Challenge Cup, he was there. He was watching and evaluating. But also, I think, looking at different coaches and their style of coaching, too," Williams said. "So he is trying to evolve himself. And I think as a player, you can respect that. You think if the coach is going to grow and get better then I, as a player, need to do the same thing.”

True to form, Williams is still evolving — even as she heads into her offseason.

“I think that for me, I’m always going to continue working on my finishing, I think every forward is going to say that. And just having confidence in this system. We play a 4-3-3 in North Carolina, it’s a 4-4-2 (with the national team). And so just the different styles of runs and the different systems, and working on that. It’s a bit of a different movement," she said. "So going back home and working on the movements that I don’t necessarily get to work on in North Carolina is what I’m planning on doing.”