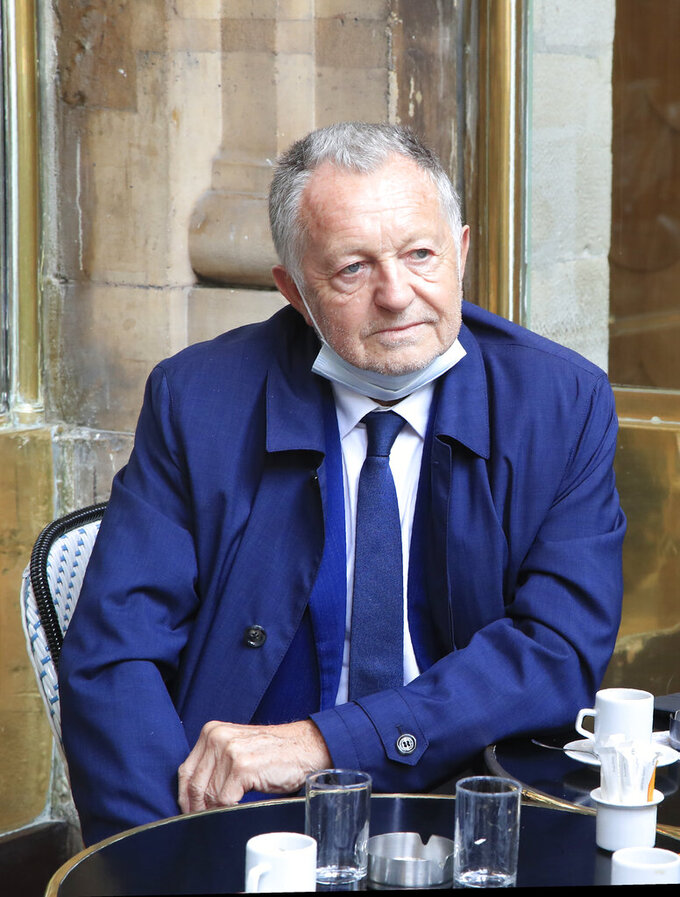 Lyon soccer club President Jean-Michel Aulas sits in a cafe prior to a hearing at France's highest administrative court, the Council of State, in Paris, Thursday, June 4, 2020. Jean-Michel Aulas is asking French authorities to backpedal on their decision to end the football season prematurely amid the coronavirus pandemic. The men's league was canceled with 10 rounds remaining, Paris Saint-Germain declared champion, and Lyon finished outside the European places in seventh. (AP Photo/Michel Euler)

PARIS (AP) — The president of soccer club Lyon asked a court Thursday to reverse a decision to cancel the rest of the French league season, saying it was “absurd” to halt the competition so early.

Lyon took the case to the Council of State in a bid to force the league to play the remaining 10 matches of the aborted season.

“It was absurd to call the league off (on April 30) while other leagues reserved the right not to. Germany is already playing again, Spain will next week,” Aulas said at a three-hour long hearing. “It’s the league which took the decision and can take the decision to resume ... I’m shocked that we’re here debating whether we can play or not.”

The Bundesliga resumed last month, while Spain's La Liga is restarting on June 12. The English Premier League is set to resume on June 17, and Italy’s Serie A three days later.

Aulas thinks it's not too late for France.

“We can train for three or four weeks and finish the league by the end of August,” he said. “Lyon is resuming training on June 8 with a health protocol which has been approved.”

Amiens and Toulouse were also present at the hearing in an attempt to overturn their relegation, although they are not arguing for a league restart.

Judge Bertrand Dacosta said he will deliver his verdict either Monday or Tuesday.

The LFP canceled the league two days after Prime Minister Édouard Philippe ordered all sports competitions to be called off because of the coronavirus pandemic. He specifically mentioned soccer in his address to parliament on Apr. 28.

Runaway leader Paris Saint-Germain was declared champion. Lyon finished seventh and missed out on a Europa League place while Amiens and last-place Toulouse went down.

Amiens and Toulouse have proposed a 22-team league next season.

They argued that relegation was unjust because there were no statutes in place for such a scenario, and that it was an arbitrary decision considering the standings could have been different if the pandemic had led to the league shutting down earlier.

Lyon argued that the table was unfair because teams had not played the same amount of games home and away or met the same opponents. It said the league should be declared void if it can’t be resumed.

Ligue 1’s director Didier Quillot sat across from Aulas at a sometimes heated hearing and defended the LFP's decision.

“We acted with pragmatism,” he said.

Aulas argued that missing out on European competition would impact finances and weaken Lyon’s presence in the transfer market. Lyon can still qualify for the Europa League if it beats PSG in the League Cup final — which was not canceled.

A lawyer for Lyon said that the health situation could have improved between April 30 and late May, while the league repeated it was only acting on government orders.

Quillot also said it was not possible to delay the start of the new season on Aug. 23, in part because of a new TV rights contract with broadcaster Mediapro.

Aulas argued that next season could begin in mid-September in line with the Spanish league.