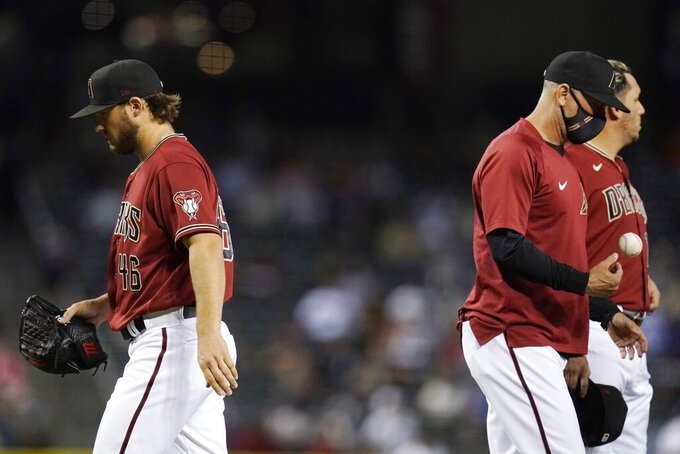 Arizona Diamondbacks starting pitcher Riley Smith (46) walks off the field after being removed by manager Torey Lovullo, front right, as third baseman Asdrubal Cabrera pauses at the mound during the fifth inning of a baseball game against the San Diego Padres on Wednesday, April 28, 2021, in Phoenix. (AP Photo/Ross D. Franklin)

Machado’s triple capped a string of seven straight hits for the Padres, who got only one runner as far as second base in the first four innings against Arizona emergency starter Riley Smith (1-1).

Kim and Tatis had RBI singles in the fifth, Kim had his first career two-RBI game and Jake Cronenworth hit a pinch-homer for San Diego, which broke an 11-game losing streak at Chase Field. Jorge Mateo added a two-run homer in the ninth, his first in the majors.

Weathers, who entered with an 0.59 ERA, was replaced because of left arm soreness after pitching a scoreless first inning. Aaron Northcraft (1-0), the third of eight Padres’ pitchers, got his first major league victory.

“These guys are just huge,” San Diego manager Jayce Tingler said of the relievers. “The entire bullpen stepping up and keeping us the game.

“They throw their roles out and understand it is next man up. They are just waiting for the call. Just phenomenal. Some of our better days are when we have to do it like this.”

Wyatt Mathisen homered and Nick Ahmed had two hits and two RBIs for Arizona, which had won seven of eight. The Diamondbacks won the series opener Tuesday to move over .500 for the first time this season but dropped to 12-12.

Jurickson Profar, who also had two hits, singled to open the San Diego fifth and Victor Caratini, Kim, Tommy Pham, Tatis and Trent Grisham followed with singles for a 3-2 lead before Machado cleared the bases on the line drive just out of the reach of diving left fielder David Peralta.

The Padres’ relievers gave up one run and five hits over the final five innings after being staked to a 6-2 lead.

“I get excited. It’s a time for me to go put there and do what I love to do for a living,” said Austin Adams, who pitched a scoreless fifth.

Tingler said Weathers was diagnosed with joint inflammation on the outside of his left forearm near the elbow. He didn't rule out Weathers making his next start.

Tingler and a trainer visited the mound after Weathers’ first two pitches, both changeups in the mid-80 mph range. Weathers reported some soreness after the first inning and was removed.

Myers was cleared to play as the game progressed, and he contributed an RBI single as a pinch-hitter in a three-run eighth inning.

Arizona right fielder Josh Rojas took a home run away from Tatis with a leaping catch at the 376-foot sign in right-center field with runners on the corners for the first out of the eighth inning.

Tatis still got an RBI when Kim tagged and scored from third base.

Padres: C Austin Nola (fractured left finger) was activated from the injured list prior to the game and made his first appearance of the season, flying out as a pinch-hitter in the ninth inning. C Luis Campusano was optioned to the alternate training site. ... OF Tommy Pham (calf) had a pinch-hit single in the fifth inning but was removed for a pinch-runner after going from second to third on a single.

Diamondbacks: RHP Taylor Widener (right groin strain) was scratched from a schedule start Wednesday and placed on the injured list after feeling tightness while shagging balls during batting practice Tuesday. … OK Kole Calhoun (left hamstring) was placed on the injured list. … RHP Joakim Soria (calf) threw at the alternate training site and took PFP on Tuesday and is “getting pretty close” to returning from the injured list, manager Torey Lovullo said. … C/OF Daulton Varsho was recalled to replace Calhoun.

Diamondbacks: RHP Luke Weaver (1-2, 4.57 ERA) will oppose Colorado right-hander Antonio Senzatela (1-3, 5.76) in the opener of a four-game home at Chase Field on Thursday.