Maddison celebrates alone as Leicester jumps to 2nd in EPL 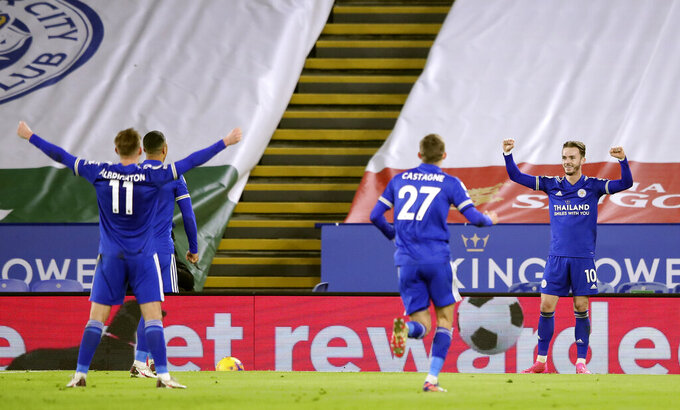 After running onto Youri Tielemans' pass and smashing home a rising shot into the roof of the net in the 37th minute, Maddison turned to face his approaching teammates and — with a broad smile on his face — waved them away before applauding himself repeatedly.

“If little things like that are what we need to keep football going, then so be it,” Maddison said. "We have been told to stop gatherings of people and I tried to make it light-hearted.

“Footballers, we get a lot of stick and it’s nice to put a lighter note on it."

Amid a surge in COVID-19 cases in England because of a new variant, the Premier League has warned clubs that punishments will be handed out for flouting the rules when it comes to celebrations. Some have questioned whether football should continue to be played in the circumstances.

Harvey Barnes netted the second goal in the fifth and final minute of second-half stoppage time at King Power Stadium, running in behind Southampton's defense to slot home a finish at the end of a counterattack.

Leicester again looks like challenging for the Champions League qualification spots like last year when the team fell short in the final weeks after looking like a lock in the top four.

“It’s nice to be second in the table," Maddison said, "but last year we petered off in the new year so the next few months will be tough.”

Southampton lacked a cutting edge without star striker Danny Ings, who missed the game after only recently returning to training after contracting the coronavirus.