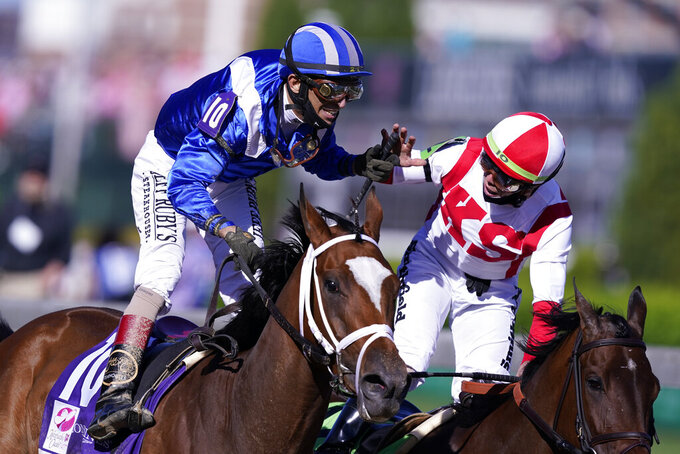 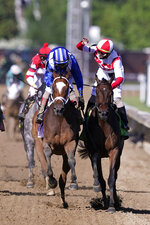 LOUISVILLE, Ky. (AP) — After Malathaat outdueled Search Results down the stretch to win the 147th Kentucky Oaks by a neck, runner-up jockey Irad Ortiz Jr. patted Malathaat's jockey, John Velazquez, on the shoulder to congratulate him.

“We just got beat today,” Ortiz said. “She ran a really solid effort and fought hard down the stretch.”

Malathaat, the 5-2 favorite, edged Search Results by a neck after overtaking Travel Column entering the stretch in the $1.25 million race for 3-year-old fillies on Friday. The Oaks was back in its traditional spring spot at Churchill Downs the day before the Kentucky Derby; both races were delayed to Labor Day weekend last year because of the coronavirus pandemic.

Todd Pletcher’s unbeaten bay filly broke a little wide from the No. 10 post in the 13-horse field and was bumped before settling into the mix rounding the first turn.

Malathaat surged forward and charged after the final turn to move past a fading Travel Column before stalking Search Results.

Malathaat got the edge in the final furlong and held on to improve to 5-0 and give Pletcher his fourth Oaks victory and first since 2013 with Princess of Sylmar. Velazquez then had to make a quick jump off the filly when she reared back as handlers tried to place the winner's garland of lilies on her.

“She didn’t get away the best, but I got a spot with her," said Velazquez, who won his second Oaks. "She was running well and when I turned for home I had a target (Search Results) to send her after. We got up next to her and my filly went by.

"The other filly came back but I could tell I was still in control. I never thought I was going to do anything but win.”

Malathaat’s victory provided an emotional lift for Shadwell Stable after owner Sheikh Hamdan bin Rashid al Maktoum, the deputy prime minister of the United Arab Emirates, died in March at age 75. He is the brother of Sheikh Mohammed, the ruler of Dubai who owns early Kentucky Derby favorite Essential Quality and enters the Derby amid allegations that he has violated human rights and orchestrated the disappearance of his own daughter.

The Lexington stable has enjoyed its share of success, winning the Eclipse Award as top owner in 2007, a year after Jazil won the Belmont Stakes and Invasor earned Horse of the Year honors. The Oaks trophy adds to the late owner's legacy.

“Having Malathaat to step up and give him an Oaks win is more than we could ask for,” Shadwell vice president and general manager Rick Nichols said.

The daughter of Curlin and Dreaming of Julia by A.P. Indy is exceeding expectations with a pattern of close victories as a 3-year-old. Nearly four weeks earlier, Malathaat stormed to victory by a head over Pass the Champagne in the Ashland at Keeneland, which established her as the filly to beat in the Oaks.

“One of the things we talked about before the race is this filly loves a target,” said Pletcher, who on Saturday will attempt to become the first trainer since Ben Jones in 1952 to win the Oaks and Kentucky Derby in the same year.

“She’ll identify that target and go get it. Once she gets there, then to her the game is complete. As long as that filly kept engaging her, she was going to find a little more."