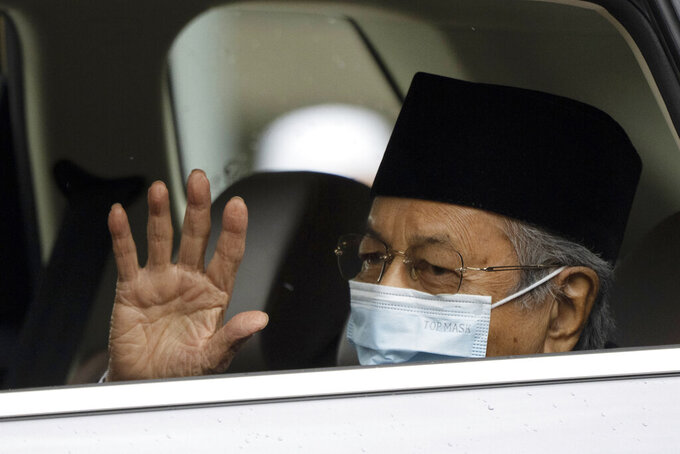 KUALA LUMPUR, Malaysia (AP) — Malaysia's king is holding consultations with political leaders, including former Prime Minister Mahathir Mohamad, amid public concern over a sharp spike in coronavirus cases that has led to a second nationwide lockdown.

Such consultations are unusual and come ahead of the Aug. 1 expiration of a coronavirus emergency declared by Prime Minister Muhyiddin Yassin. King Sultan Abdullah Sultan Ahmad approved the emergency in early January, but critics said it was a political ruse to help the embattled prime minister stay in power despite challenges to his leadership.

The emergency suspends Parliament but includes no other measures. Muhyiddin’s government remains in control and has extraordinary powers to introduce laws without parliamentary approval.

Opposition leader Anwar Ibrahim told reporters after meeting with the king on Wednesday that he urged an end to the emergency so that Parliament can resume. He has said the emergency hasn't helped control the pandemic.

Mahathir echoed that sentiment after meeting with the king on Thursday, noting that daily cases in the country surged to more than 9,000 last month, nearly five times as much as when the emergency was imposed. The government recently reintroduced a two-week ban on social and business activities until June 14 which is likely to be extended. New infections still exceed 5,000 a day, with the country's confirmed total breaching 639,000 and deaths exceeding 3,600.

Mahathir said he suggested to the king that a national operations council be formed to replace Muhyiddin's “failed government." But the monarch told him any such proposal must come from the government itself.

“This is seen as a failed government. Politically, this government is not recognized by the people,” Mahathir said. He said he offered to head the council, which could be given power to tackle the country's problems, but didn't think that would happen.

Muhyiddin took power in March 2020 after instigating the collapse of Mahathir’s reformist alliance that won 2018 elections and joining with the opposition to form a Malay-centric government. But his government is shaky with a razor-thin majority in Parliament. Muhyiddin faces challenges from within his coalition and from the opposition, but support for his leadership cannot be tested with Parliament suspended.

The king is to continue meeting other political leaders over the next few days before hosting a gathering of state rulers next Wednesday. The palace has said the rulers' meeting will discuss efforts to control the pandemic.

Oh Ei Sun, a senior fellow at the Singapore Institute of International Affairs, said the king's unexpected move to consult political leaders fueled speculation that Muhyiddin's government may have lost its parliamentary majority.

“There is also popular sentiment about the government's incompetence in handling the pandemic. Many people are hoping the king could do something about it," he said. While the monarch may not constitutionally be able to end the emergency, he can reject plans by the government to extend it beyond Aug. 1, Oh said.

In February, the king said Parliament can sit despite the emergency order, but Muhyiddin’s government said it wasn’t safe because there are many older lawmakers. The government recently said it is considering virtual Parliament sessions.