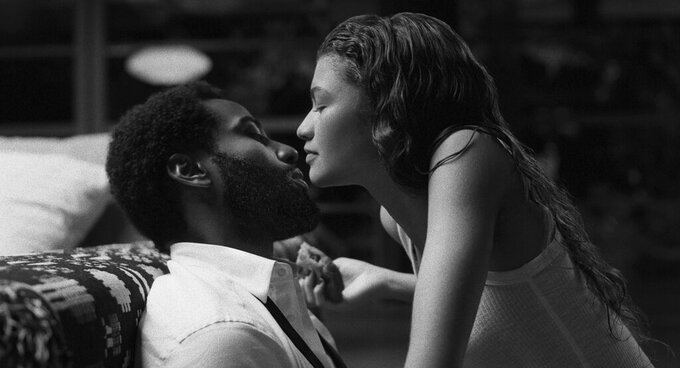 This image released by Netflix shows Zendaya, right, and John David Washington in a scene from "Malcolm & Marie." (Dominic Miller/Netflix via AP)

NEW YORK (AP) — The global pandemic was not about to stop filmmaker Sam Levinson without a fight — literally.

The creator of HBO's “Euphoria” found his hit series shuttered so he pivoted to writing and directing “Malcolm & Marie,” a film about an epic lovers’ quarrel starring John David Washington and Zendaya — who also stars in the HBO show.

Set in a luxury California beach house, Washington's Malcolm — an up-and-coming director — and Zendaya's Marie — an out-of-work actress — have returned after a party where his film has premiered to rapturous applause. But he forgot to thank Marie and that leads to an outpouring of simmering grievances.

Levinson had been thinking about possible script ideas when he seized on this argument as a way to explore art and appreciation. He ran it past his wife, producer Ashley Levinson, a frequent collaborator whose credits include “Bombshell” and “Queen & Slim.”

"I remember I was like I turned to Ash and I said, ‘What if it’s about a filmmaker who forgets to thank his partner at a premiere?’ And we just both burst into laughter because, granted, that might have been something I did at one point.”

While he and his wife had a calm conversation after his slight, Levinson wrote a two-hour blow out, likely Malcolm and Marie's worst fight. “Malcolm, I promise you nothing productive is going to be said tonight,” Marie warns.

But back and forth the lovers go, pushing and goading each other. She says he's a megalomaniac and a narcissist. He says she's needy and crazy. "Stop blaming me for your inabilities,” Malcolm tells Marie. She yells: “Do you know how disturbing it is that you can compartmentalize to such a degree that you can abuse me while eating mac and cheese?”

Is this how arguments go in the Levinson household? Ashley Levinson just laughs: “If you know Sam at all, you know that this is Sam in battle with himself. I think he is both Marie and Malcolm.”

During their on-screen argument, the couple also lash out at Hollywood and the hypocrisy of the movie business. They mock celebrities “in a $2,000 dress talking about socialism on the red carpet” and film reviewers who are clueless, throwing around academic nonsense to cover their lack of knowledge.

One critic in particular — a “white lady from the Los Angeles Times” — is a repeated target. She has apparently panned Malcolm’s previous movie, but calls his new one “a cinematic tour de force.” Still, Malcolm is unhappy.

“Malcolm is enraged not by a terrible review, but by a fantastic review. He’s being praised, but not in the way that he wants to be praised. So, therefore, he’s out screaming at the trees,” said Sam Levinson. Making matters worse, Marie begins to side with this particular critic.

Washington said he was attracted to his character's intellect and love of craft. “I love his insecurities — all on display, full display. I love the anxiety of being put in a box, whether it be socially or artistically,” he said. "So just playing a human being — being unapologetically Black — it was a dream come true.”

Sam Levinson — whose 2018 film “Assassination Nation” just happened to be roasted by a white female critic at the Los Angeles Times — wasn't going to be drawn into a real-life fight on the eve of his new film's release on Netflix.

“I think that the future of filmmaking has always been dependent on good criticism,” he said, noting that his new film ends up siding with that Los Angeles Times critic. “I think it’s rooted in deep respect for the profession,” he said. “There’s so many fantastic critics and I mean that sincerely.”

For all its ferocity, “Malcolm & Marie” was born of inaction. Virus pandemic fears shut down the “Euphoria” set the day before the second season was to start production. The Levinsons wanted to keep their “family” together.

“The restrictions of COVID kind of became an interesting challenge,” Sam Levinson said. “Can we tell a story with just one house, two actors, nothing else, a skeleton crew? And and that’s sort of how it how it kind of evolved.”

Shot in black-and-white and 35mm, the film employed many of the “Euphoria” crew and they were offered a financial stake in it. The film opens with a vast list of production credits, nicely acknowledging the behind-the-scenes filmmakers right at the top.

By creating art in the pandemic, Sam Levinson and the 22 cast and crew became pioneers in establishing testing protocols, social distancing and quarantine procedures that have since become standard in Hollywood.

“It’s sort of incumbent upon us to help people who are unable to get back to work and also just share our findings with the rest of the business so we can figure out a path forward,” he said.

He shakes off the comparison to a similar drama — Mike Nichols’ 1966 stark black-and-white film of Edward Albee’s play, “Who’s Afraid of Virginia Woolf?” Levinson said he never tried to ape that masterpiece ("I would fail miserably") but let it influence his exploration of how the lockdown has affected all of us.

“If we have the restrictions of one house, one location and two people, what are they going to be dealing with other than their relationship?" he said. "That felt like it might possibly speak to what a lot of the world is feeling right now, sort of stuck at home and dealing with the realities of being in a relationship.”

Despite it's striped-down nature, the film is rich with topics. Ashley Levinson likes to think it's “an examination of the fragility of an artist.” Her husband hopes viewers will see gratitude: “It’s a movie about acknowledging the life that the people around you build.”