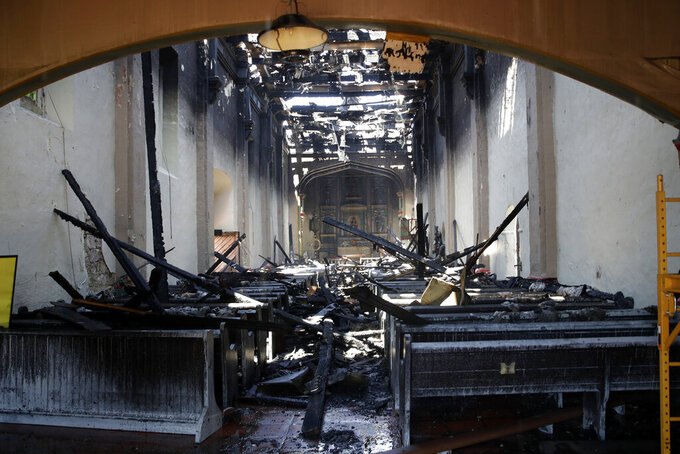 FILE - In this Saturday, July 11, 2020, file photo, the interior of the San Gabriel Mission is damaged following a morning fire in San Gabriel, Calif. A fire that gutted much of the historic Catholic church in Southern California last year was intentionally set by a 57-year-old man, prosecutors said Tuesday, May 4, 2021. John David Corey faces multiple felony counts including arson of an inhabited structure, the Los Angeles County District Attorney's Office said in a statement. (AP Photo/Marcio Jose Sanchez, File)

The July 11 blaze engulfed the the rooftop and most of the interior of the San Gabriel Mission as it was undergoing renovations to mark its upcoming 250th anniversary celebration. No one was hurt in the fire.

It was not immediately clear if he had an attorney who could speak on his behalf.

Prosecutors contend Corey broke into the mission and started the fire, “which spread to the roof and along the length of the church," the statement said. No motive was given.

The flames spared the altar and historic paintings. Other artifacts had been stored elsewhere as the church underwent renovations.

The coronavirus pandemic forced Masses online but the church building will resume indoor services May 22, according to its website.

“The loss to the mission was in the millions of dollars, but the loss to the community is immeasurable,” District Attorney George Gascón said.

The church was the fourth in a string of Roman Catholic missions established across California by Junipero Serra — an 18th-century Franciscan priest who was canonized by Pope Francis in 2015 — during the era of Spanish colonization.

While many credit Serra with spreading Catholicism along the West Coast, he has long been a symbol of oppression among Indigenous activists.

Racial injustice protesters last year toppled Serra statues in San Francisco, Los Angeles and Sacramento, and San Gabriel officials had moved the mission’s Serra statue before the fire to guard against potential vandalism. The public outcry against Serra last year was part of the investigation into the fire, but officials didn't immediately announce any connection.

An arraignment date for Corey was not immediately scheduled.