Man who used van to kill 10 pedestrians in Toronto guilty 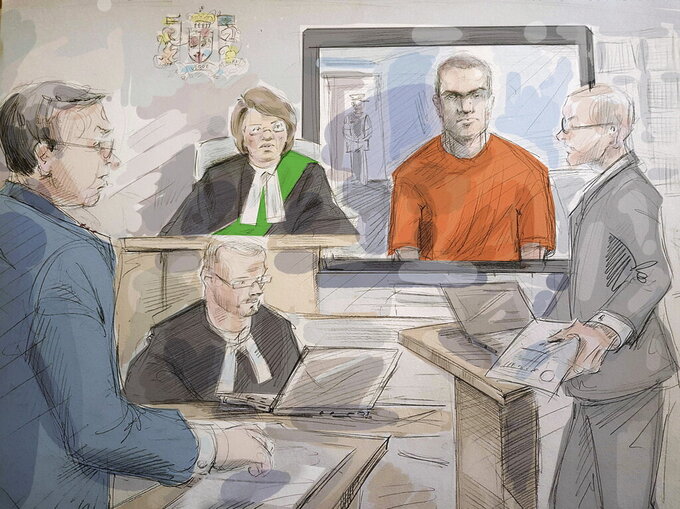 FILE - In this May 10, 2018 file photo of a courtroom sketch, from left, defense lawyer Boris Bytensky, Justice Ruby Wong, Alek Minassian and Crown prosecutor Joe Callaghan are shown in court as Minassian appears by video in Toronto, Canada. Minassian, who admitted using a van to kill 10 pedestrians in Toronto on April 23, 2018, was found guilty on Wednesday, March 3, 2021. (Alexandra Newbould/The Canadian Press via AP, File)

TORONTO (AP) — A man who admitted using a van to kill 10 pedestrians in Toronto was found guilty on Wednesday in a case that drew attention to an online world of sexual loneliness, rage and misogyny.

Alek Minassian faced 10 counts of first-degree murder and 16 counts of attempted murder in connection with the April 23, 2018, attack.

Minassian, 28, told police he belonged to an online community of sexually frustrated men, some of whom have plotted attacks on people who have sex. He admitted to police that he drove a rental van into crowds of pedestrians in a busy north Toronto neighborhood. Eight women and two men ranging in age from 22 to 94 died.

His lawyer argued he didn’t know what he was doing was wrong because he has autism spectrum disorder, angering advocates for the rights of autistic individuals. Minassian had pleaded not guilty and his lawyer argued his client was not criminally responsible.

Justice Anne Molloy said his lawyers failed to prove he was not criminally responsible. She said there is no doubt his actions were planned and deliberate and that he was fully aware of what he was doing.

"His attack on these 26 victims that day was an act of a reasoning mind," Molloy said.

“It does not matter that he does not have remorse, nor empathize with the victims. Lack of empathy for the suffering of victims, even an incapacity to empathize for whatever reason, does not constitute a defense.”

The judge noted the man sought and enjoyed notoriety from his actions. She did not name the accused in her decision, referring to him as “John Doe" and said she hopes that he will no longer be named.

The verdict was livestreamed on YouTube because of the pandemic. He faces an automatic life sentence with no parole for at least 25 years. Sentencing will be at a later date.

Minassian, who said he never had a girlfriend and was a virgin, rented the van and admitted to police he used the van as a weapon and said he wanted to inspire more attacks.

He called himself an “incel,” short for “involuntary celibate,” an online subculture that has been linked to other attacks in California and Florida and that often promotes the idea men are entitled to have sex with women.

Minassian claimed to police he was in contact with Elliot Rodger, a community college student who killed six people and wounded 13 in shooting and stabbing attacks in 2014 near the University of California, Santa Barbara, before apparently shooting himself to death.

“Nearly three years ago, our entire city was rocked by this heinous act of violence,” Toronto Mayor John Tory said in a statement. “Make no mistake, this was an attack fueled by misogyny and hatred of women and should be treated as such.”

Autism Canada denounced what it called “egregious claims” by Minassian’s lawyer that the man didn’t know what he was doing was wrong because he has autism spectrum disorder. The Ontario Autism Coalition said in a statement that it was relieved that the use of autism was rejected.

“He can spend the rest of his life in jail because he deserves it. He took lives and he didn’t care and you just have to be accountable for what you do," said Cathy Riddell, a survivor who suffered injuries to her shoulder, spine, pelvis, and ribs as well as head trauma and a punctured lung.

Boris Bytensky, Minassian’s lawyer, said he's not discussed with his client whether he will appeal.

The trial took place on Zoom last year because of the coronavirus pandemic.