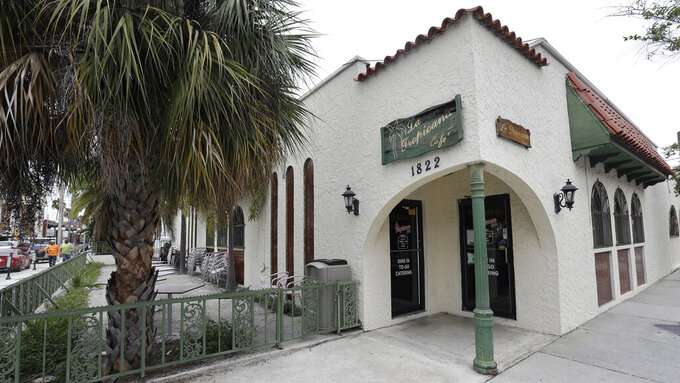 FILE- In this June 3, 2020 file photo, workmen walk by the shuttered La Tropicana Cafe in Tampa, Fla. The cafe, which first acted as a hub for immigrants when it opened in 1963 and has since been a stop for politicians campaigning in the area, has joined the long list of businesses lost to the coronavirus pandemic. (AP Photo/Chris O'Meara, FILE)

TAMPA, Fla. (AP) — La Tropicana Cafe has been a cornerstone of Tampa’s historic Latin-influenced Ybor City neighborhood since the 1960s, well known as a gathering spot where movers and shakers and even mobsters mixed with construction workers over Cuban coffee and sandwiches.

Now its doors are likely closed for good, like so many other bars and restaurants done in by the coronavirus pandemic.

Every neighborhood loses something precious when local eateries and hangouts get shuttered, but as infections spread and the economic fallout continues, the loss of iconic establishments like La Tropicana is particularly hard to swallow.

“In Tampa, if you were a politician, La Tropicana was where you would show up," said Patrick Manteiga, editor and publisher of La Gaceta, a local newspaper that publishes in English, Spanish and Italian. For years, his father, Roland Manteiga, kept a corner table reserved for himself, with a special red telephone to call in scoops.

There are photos of the elder Manteiga with Presidents Jimmy Carter and George H.W. Bush, Florida Govs. Bob Martinez and Lawton Chiles, and local politicians of all stripes. It was also frequently reported in local media that Tampa's longtime mob boss, Santo Trafficante Jr., sometimes stopped by.

“La Tropicana become a favorite hangout. You could go in, talk a little politics, get your name in the paper,” Patrick Manteiga said. “If you’re a powerbroker trying to have lunch on the cheap, it was the place to go.”

The Ybor City landmark is hardly alone in shutting down for good. Iconic spots from San Francisco to New York also won’t be back.

Restaurants are traditionally low-margin businesses in high-rent locations, with little in cash reserves. They depend on liquor markups and high cash flow to sustain their overhead, but revenues have plummeted nationwide as fears of infection and public health requirements keep customers away.

More than half the nearly 24,000 restaurants that have closed since the pandemic began will not reopen, the Yelp online business review service found in a July 25 economic report.

In San Francisco, the 83-year-old Louis’ Restaurant with stunning views of the Pacific Ocean, is among them.

“To wait out this pandemic was financially unreasonable,” the restaurant said last month.

In Forest Hills, New York, the Irish Cottage pub closed permanently in May, posting its farewell hopes on Facebook after serving food and drink for six decades.

“60 years of Good Cheer. My mom would say ... There’s no use crying in your beer. May the fond memories & good times shared by our Patrons of the Irish Cottage burn bright in their hearts forever more,” the post said.

One of the most venerable landmarks to close is New York's Paris Cafe, which has been at the South Street Seaport in lower Manhattan since 1873. “Through no fault of anyone but the outbreak of this virus, we are unable to forge a way forward that makes economic sense,” its owners said.

Up for sale in Austin, Texas, is a former gas station converted in 1933 into a restaurant and music venue called Threadgill's, where the many acts that performed there in the 1960s included an unknown University of Texas student named Janis Joplin, before she became a superstar.

“Thank you for making Threadgill’s a part of Austin’s DNA and supporting us over the years,” the restaurant said on its website.

Another well-known Florida spot, the Caribbean restaurant Ortanique on the Mile in Coral Gables, decided after 21 years to shut down.

“Now, with deep regret and pain, we recognize it is impossible to continue in this current environment,” Ortanique’s owners said in July, adding they are “so bitter that COVID-19 has taken down a Coral Gables institution.”

Some culinary landmarks are hoping to make it. Manny's Cafeteria and Delicatessen in Chicago vows to stay open after 78 years, using online appeals to encourage customers to come for takeout.

Last month, customers lined up around the block after Manny's posted this on Twitter: “We are struggling. This isn’t a joke. Support your fav deli for dinner tonight. Thx.”

After the crowds arrived, Manny's put this on Facebook: “Chicago! You’ve outdone yourself. Thank you from the bottom of our hearts (and stomachs of course)."

One of those customers was David Axelrod, former senior advisor to President Barack Obama.

“Manny’s is a Chicago institution," Axelrod tweeted. "I’ve been going there for forty years to clog my arteries and clear my head! If you’re looking for great deli in and around Chicago, give ’em a try! Food is delicious!!”

For regular customers or sometime visitors, historic restaurants and bars have made lasting memories for so many people as they crossed paths with celebrities or, like Joplin, the soon-to-be famous. Patrick Manteiga, for one, says they can't truly be replaced. “You just lose those little pieces of history,” he said.