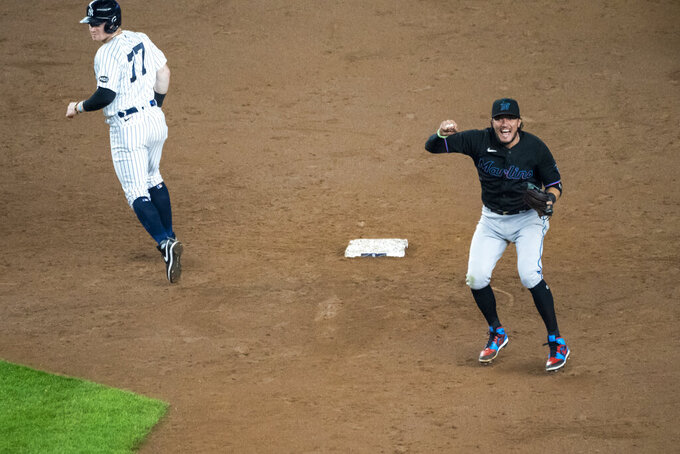 Miami Marlins shortstop Miguel Rojas, right, celebrates after throwing to first for the final out to clinch a playoff berth after the tenth inning of a baseball game against the New York Yankees at Yankee Stadium, Friday, Sept. 25, 2020, in New York. Yankees' Clint Frazier, left, looks back toward first base. (AP Photo/Corey Sipkin)

NEW YORK (AP) — Forced from the field by COVID-19, the Miami Marlins returned with enough force to reach the playoffs for the first time since their 2003 championship.

An NL-worst 57-105 a year ago, they sealed the improbable berth on the field of the team that Miami CEO Derek Jeter and manager Don Mattingly once captained.

“I think this is a good lesson for everyone. It really goes back to the players believing,” Mattingly said Friday night after a 4-3, 10-inning win over the New York Yankees.

Miami will start the playoffs on the road Wednesday, its first postseason game since winning the 2003 World Series as the Florida Marlins, capped by a Game 6 victory in the Bronx over Jeter and his New York teammates at the previous version of Yankee Stadium.

“We play loose. We got nothing to lose. We’re playing with house money.,” said Brandon Kintzler, who got DJ LeMahieu to ground into a game-ending double play with the bases loaded after Jesús Aguilar hit a sacrifice fly in the top of the 10th. “We are a dangerous team. And we really don’t care if anyone says we're overachievers.”

Miami (30-28), second behind Atlanta in the NL East, became the first team to make the playoffs in the year following a 100-loss season. The Marlins achieved the feat despite being beset by a virus outbreak early this season that prevented them from playing for more than a week.

After the final out, Marlins players ran onto the field, formed a line and exchanged non socially-distant hugs, then posed for photos across the mound.

“I can’t contain the tears, because it’s a lot of grind, a lot of passion,” shortstop Miguel Rojas said. “It wasn’t just the virus. Last year we lost 100 games. But we came out this year with the hope everything was going to be better. When we had the outbreak, the guys who got an opportunity to help the organization, thank you for everything you did.”

Miami was one of baseball’s great doubts at the start of the most shortened season since 1878, forced off the field when 18 players tested positive for COVID-19 following the opening series in Philadelphia.

New York (32-26) had already wrapped up a playoff spot but has lost five of six following a 10-game winning streak and is assured of starting the playoffs on the road. Toronto clinched a berth by beating the Yankees on Thursday.

“I don’t like any time somebody celebrates on our field or if we’re at somebody else’s place and they celebrate on their field,” Yankees star Aaron Judge said. “I’m seeing that too much.”

Garrett Cooper, traded to the Marlins by the Yankees after the 2017 season, hit a three-run homer in the first inning off J.A. Happ.

After the Yankees tied it on Aaron Hicks’ two-run double off Sandy Alcantara in the third and Judge’s RBI single off Yimi García in the eighth following an error by the pitcher on a pickoff throw, the Marlins regained the lead with an unearned run in the 10th against Chad Green (3-3).

Jon Berti sacrificed pinch-runner Monte Harrison to third and, with the infield in, Starling Marte grounded to shortstop. Gleyber Torres ran at Harrison and threw to the plate, and catcher Kyle Higashioka’s throw to third hit Harrison in the back, giving the Yankees a four-error night for the second time in three games.

With runners at second and third, Aguilar hit a sacrifice fly.

Brad Boxberger (1-0) walked his leadoff batter in the ninth but got Luke Voit to ground into a double play, and Kintzler held on for his 12th save in 14 chances.

Miami ended the second-longest postseason drought in the majors — the Seattle Mariners have been absent since 2001.

Miami returned Aug. 4 following an eight-day layoff with reinforcements from its alternate training site, the trade market and the waiver wire to replace the 18 players on the injured list and won its first five games.

“We’re just starting," said Alcantara, who handed a 3-2 lead to his bullpen in the eighth. “We’ve got to keep doing what we’re doing.”

Yankees manager Aaron Boone was ejected for arguing from the dugout in the first inning. Plate umpire John Tumpane called out Judge on a full-count slider that appeared to drop well below the knees and Boone argued during the next pitch, to Hicks, then was ejected. Television microphones caught several of Boone’s profane shouts.

“Reacting to a terrible call and then following it up,” Boone said. “Obviously, we see Aaron get called a lot on some bad ones down.”

Pinch-runner Michael Tauchman stole second base in the eighth following a leadoff single by Gary Sánchez but was sent back to first because Tumpane interfered with the throw by catcher Chad Wallach. Clint Frazier struck out on the next pitch and snapped his bat over a leg.

New York took the major league lead with 47 errors. Sánchez was called for catcher’s interference for the third time in five days and fourth time this month.

Mattingly thought of José Fernández, the former Marlins All-Star pitcher who died four years earlier to the night at age 24 while piloting a boat that crashed. An investigation found he was legally drunk and had cocaine in his system. The night also marked the sixth anniversary of Jeter’s final game at Yankee Stadium.

RHP Deivi García (2-2, 4.88) starts Saturday for the Yankees and LHP Trevor Rogers (1-2, 6.84) for the Marlins. García will be making the sixth start of his rookie season.