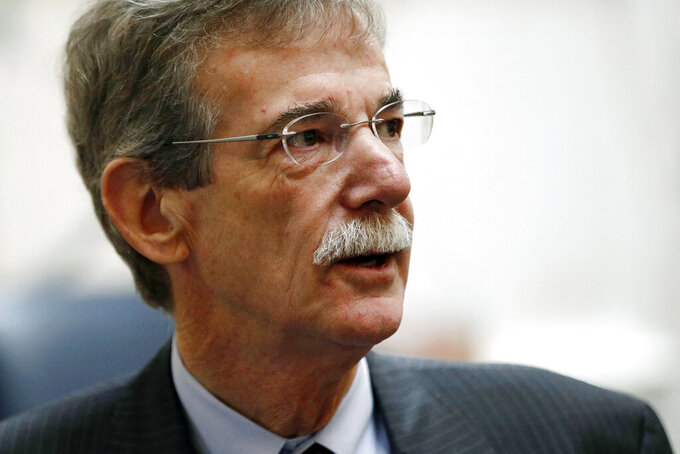 FILE - In this Wednesday, Jan. 30, 2019, file photo, Maryland Attorney General Brian Frosh walks on the House of Delegates chamber floor before Gov. Larry Hogan's annual State of the State address to a joint session of the legislature in Annapolis, Md. Frosh warned Friday, July 10, 2020, of “devastating consequences” if all eligible voters are not directly sent ballots to mail in for November's election due to safety concerns about the coronavirus, instead of Gov. Larry Hogan's directive to mail applications for voters to request absentee ballots if they want to vote by mail. (AP Photo/Patrick Semansky, File)

ANNAPOLIS, Md. (AP) — Maryland’s attorney general warned Friday of “devastating consequences” if all eligible voters are not directly sent ballots to mail in for November's election due to safety concerns about the coronavirus, instead of Gov. Larry Hogan's directive to mail applications for voters to request absentee ballots if they want to vote by mail.

“We cannot overstate the devastating consequences likely to result if the State of Maryland does not plan now to mail every voter a ballot for the 2020 Presidential General Election," Democratic Attorney General Brian Frosh wrote in a statement Friday.

After problems with ballots being mailed on schedule to all eligible voters in last month's mostly vote-by-mail primary and long lines at polls, Hogan directed elections officials this week to open all polling locations on Election Day for in-person voting, as well as early voting centers.

The Republican governor also directed the board of elections to send all eligible voters an application to request an absentee ballot, instead of sending a ballot straight to voters, as was done in the primary. That would require voters to mail in the application in order to get an absentee ballot sent to them, instead of simply receiving the ballot right away in the mail.

In his announcement Wednesday, Hogan wrote that every effort should be made to promote early voting, absentee voting by mail and voting at off-peak times as safe and efficient options. The governor wrote that would “maximize participation.”

Michael Ricci, Hogan's spokesman, indicated Friday that Hogan had no plans to change his directive.

“Brian Frosh is now suggesting that we ignore our election laws, limit options for voters, and suppress the vote by closing polling precincts," Ricci said. "We will do none of that. We will follow the law, and actively encourage early voting, absentee voting-by-mail, and voting at off-peak times as safe and efficient options for voters.”

Maryland held its first statewide primary largely by mail last month out of health concerns for people who work the polls as well as voters due to the pandemic. Only four in-person voting centers were open in each jurisdiction, though two more were added in Baltimore after elections officials learned thousands of ballots were not mailed on schedule.

The attorney general noted that the Maryland Association of Elections Officials specifically considered the option that Hogan chose, and they said other jurisdictions that tried it found it was “costly, inefficient and unsuccessful.”

“If we vote as the Governor proposes, more than 4,000 election judges will have to be recruited and trained for Baltimore City," Frosh wrote. “Anne Arundel will need more than 3,000. The judges will be exposed to each other during training and to thousands of voters during the election. Who will take those risks?”