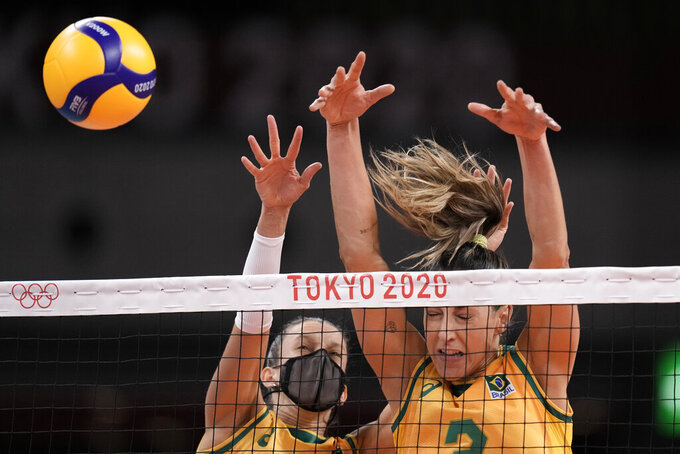 TOKYO (AP) — For Brazilian volleyball player Lucas Saatkamp, the decision to wear a mask at the Tokyo Olympics is about protecting his family and not sending a message.

With a 5-year-old son back home in Brazil who needs to use an inhaler because of respiratory issues, the last thing the player known as Lucão wants to do is endanger his son, wife and newborn daughter.

“I don’t want to be the model for using the mask,” he said Tuesday through an interpreter. “My only main point is to protect myself and my family. It’s not to be a role model.”

Lucão said he had the coronavirus in January, dealing with a fever and bad headache but no major issues. But despite having some protection because he had the disease and was vaccinated before coming to the Olympics, he still made the decision to wear the mask.

Lucão said he hasn't heard any praise or criticism for his decision because he doesn't spend much time reading articles or consuming social media.

He says the mask doesn't really impact his performance on the court where he has helped the Brazilians reach the semifinals in his third Olympics after winning a silver medal in 2012 and gold in 2016.

“For me it’s OK because volleyball is different from other sports,” he said. “There are more pauses to have time to breathe, unlike running or soccer. For me it’s not uncomfortable.”

Lucão isn’t the only Brazilian volleyball star to play with a mask. Teammate Mauricio Borges, who has played as a reserve in Tokyo, has also competed with a mask, as has women’s setter Macris Carneiro before she went down with an ankle injury in a win over Japan.

While the maskless teammates admire what Lucão and the others are doing, they haven't followed suit.

“For me, it’s a little bit difficult,” captain Bruno Rezende said. “I try to be a setter and to motivate a lot and to talk a lot with my teammates and sometimes with the mask it’s not easy to do this job. For me, it’s impossible to use. I respect it a lot. They have their reasons.”

Lucão said the problem back home with COVID-19 is serious with Brazil having the world’s second-highest death toll with 556,000 fatalities.

That's why wearing a mask feels like a small price to pay.

“It doesn’t keep me doing the things that I want to do,” he said. “I have a normal life.”

Lucão and Brazil beat Japan in straight sets on Tuesday to advance to the semifinals against the team representing the Russian Olympic Committee. ROC beat Canada in three sets.