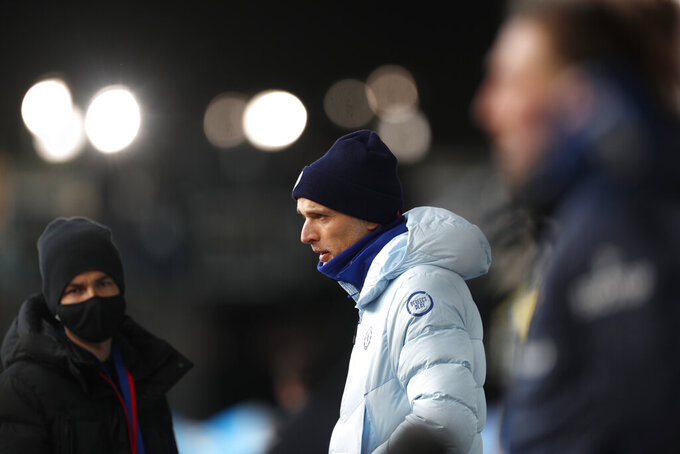 A look at what’s happening in European soccer on Wednesday:

Chelsea will be without injured Thiago Silva and Tammy Abraham when it hosts Atlético Madrid, holding a 1-0 advantage from the first leg in the Champions League round of 16 thanks to Olivier Giroud’s acrobatic goal. The Blues are also without suspended pair Jorginho and Mason Mount. Chelsea manager Thomas Tuchel noted that with five substitutions, “we will use the whole squad.” Atlético has reached the quarterfinals or better in five of its last seven Champions League campaigns — all under Diego Simeone. Atlético's Luis Suárez has 18 goals, 10 of them coming in 2021.

It would take some incredible for Lazio to knock out the reigning European champion after Bayern won the first leg 4-1 in Rome. That win marked a return to form for Bayern after a poor run in the Bundesliga, and the German club has gone from strength to strength since. A goal against Werder Bremen on Saturday took Robert Lewandowski to 38 for the season in all competitions and he could aim to break the 40 barrier against Lazio. Goalkeeper Manuel Neuer is sick and forward Kingsley Coman has a muscle problem. Neither trained with the team Tuesday but coach Hansi Flick said he hoped they would be available for the game.

Sevilla can strengthen its hold on fourth place in the Spanish league when it hosts relegation-threatened Elche in a match postponed from the second round because of the coronavirus pandemic. Sevilla was given extra time to rest after participating in the Europa League later into last season. The team coached by Julen Lopetegui is in the final qualification spot for the Champions League and could increase its gap to fifth-place Real Sociedad to nine points with a win at the Ramón Sánchez-Pizjuán Stadium. Sevilla is coming off a home victory against Real Betis in the Seville derby. It has won seven of its last nine league games, with six clean sheets in that stretch. Elche, which beat Sevilla at home two weeks ago, is one point outside the relegation zone.