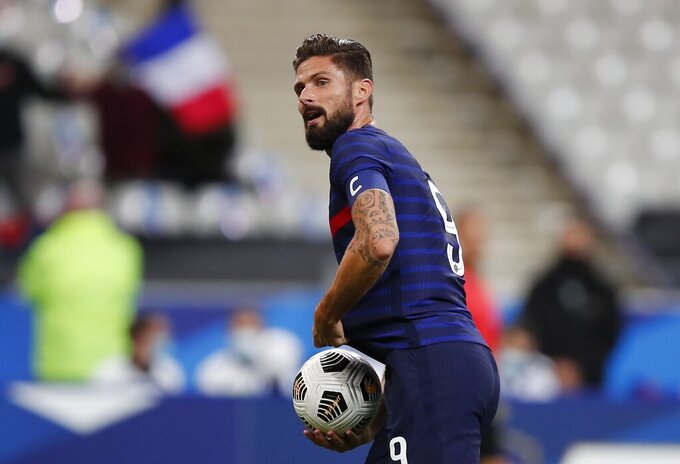 A look at the pick of the Nations League games in Europe on Sunday:

Belgium opened its Nations League group with two victories last month, while England collected four points. Belgium, the world’s top-ranked team which beat England twice at the 2018 World Cup, will be without the injured Eden Hazard and Dries Mertens at an empty Wembley Stadium. Mertens is stuck in Italy due to coronavirus regulations. Jadon Sancho and Tammy Abraham are back in contention for England after missing a 3-0 victory over Wales in a friendly on Thursday. They have been declared healthy after breaching national pandemic guidelines by attending a gathering with more than six people. Ben Chilwell was also there last weekend and remains absent with a non-coronavirus-related illness. England coach Gareth Southgate has to decide whether to keep Jack Grealish in the side after a strong display on the left of a front three. With Jordan Pickford looking far from assured in goal for Everton, Southgate also has to decide whether to retain Nick Pope in the starting lineup after a clean sheet against Wales.

First place in the group is up for grabs when World Cup winner France takes on European champion Portugal at Stade de France. They are level after two wins. Having recently overtaken Michel Platini to move into second place on France’s all-time scorers’ list with 42, Olivier Giroud can move closer to Thierry Henry’s national record of 51. But he is still way behind Cristiano Ronaldo’s tally of 101 for Portugal. The superstar will be determined to make up for a rare off day in front of goal in a 0-0 draw against Spain this week.

Italy coach Roberto Mancini is likely to recall his regular players after fielding an experimental side in last week’s friendly against Moldova. Italy nevertheless won 6-0 with several players scoring their first international goal. However, Lazio forward Ciro Immobile, the Italian league’s top goalscorer last season, should return to the starting lineup. Italy was held to by Bosnia-Herzegovina to 1-1 in their Nations League opener but went on to beat the Netherlands 1-0. The Azzurri have won 13 of their last 14 games.