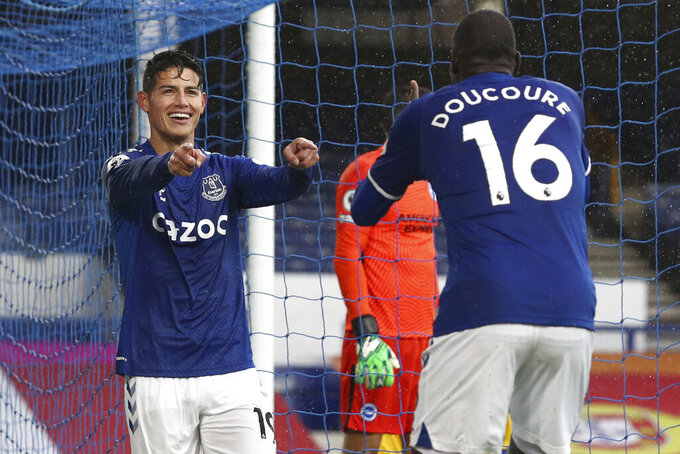 Liverpool is the defending champion but Everton is the early leader in the Premier League with a 100% record as the Merseyside rivals meet in the derby at Goodison Park. Liverpool is three points behind Carlo Ancelotti's side after four matches following a 7-2 collapse at Aston Villa two weeks ago before the international break. Sadio Mane and Thiago Alcantara will return for Liverpool after missing games with the coronavirus. Manchester United travels to Newcastle also looking to rebound from a humbling after being routed by Tottenham 6-1. Pep Guardiola welcomes former assistant Mikel Arteta when Manchester City hosts Arsenal. City will be without Kevin De Bruyne through injury, while Thomas Partey could make his Arsenal debut. Hakim Ziyech could make his long-awaited Chelsea debut in a home game against Southampton, which is chasing three straight league wins for the first time in four years.

Ronald Koeman’s Barcelona visits Getafe with a decision over where to play Antoine Griezmann. France coach Didier Deschamps has said he doesn't understand why Koeman played Griezmann on the right side of attack rather than through the middle, where he mainly plays with the national team. Griezmann agreed with Deschamps, saying the France coach “knew where to put” him after scoring an excellent goal in a 2-1 win over Croatia this week. Koeman has replied that he has spoken to Griezmann, but it looks highly likely the forward will stay put on the wing despite his continued scoring troubles. In Koeman’s words, “The coach decides, and the player has to make the most of it.” Real Madrid hosts recently promoted Cádiz looking to keep the league lead. Atlético Madrid visits Celta Vigo after two scoreless draws, and Sevilla seeks to remain unbeaten at Granada.

Bayern Munich’s break for the international games was shorter than most after beating fifth-tier Düren 3-0 in the German Cup on Thursday. The Bundesliga defense continues with a first league meeting since 2009 with Arminia Bielefeld. Bayern hasn’t lost to a promoted side since 2010. Borussia Dortmund hopes to end a barren run of five games without a win against Hoffenheim, and Hertha Berlin's preparation for visiting Stuttgart was far from ideal. “It’s the worst case scenario,” Hertha coach Bruno Labbadia said of new loan signing Matteo Guendouzi’s positive test for the coronavirus. Labbadia also has had to contend with a far-from-ideal international break for some of his players. Matheus Cunha (Brazil), Jhon Cordoba (Colombia) and Dodi Lukebakio (Belgium) traveled without playing for their national teams, while Omar Alderete went on for Paraguay only in injury time. “Now we’ll have to see how each individual deals with the rigors of travel,” said Labbadia, who is closing in on 100 Bundesliga wins as both a player and coach. Many games this weekend will be played without fans due to rising coronavirus infections across Germany.

A strange atmosphere at San Siro awaits when Inter Milan hosts city rival AC Milan in the derby with only 1,000 fans allowed in the 80,000-seat stadium because of the pandemic. Milan forward Zlatan Ibrahimović should start after returning to training this week, having recovered from the virus. Milan goes into the derby on a 19-match unbeaten run in all competitions and having won all three of its league matches without conceding a goal. But the Rossoneri have not won a Serie A derby match since 2016, while Inter has won five of their last six meetings in the league. Also, Napoli hosts Atalanta, Juventus visits Crotone and Lazio travels to Sampdoria.

Former France winger Hatem Ben Arfa could start another chapter in his erratic career with a debut for Bordeaux at former club Marseille. This is the ninth club of the 33-year-old Ben Arfa's career, one which has seen brief highs at Lyon, Newcastle and Nice but considerable lows at Paris Saint-Germain and most recently Spanish club Real Valladolid. But Bordeaux coach Jean-Louis Gasset is convinced the lavishly skilled but inconsistent Ben Arfa, who won 15 caps for Les Bleus, will prove an inspired signing. “I said before that he's a genius, and he still is,” Gasset said. “He's a player who can unlock games, set up goals. I sense that he's motivated." Marseille and Bordeaux are both in mid-table with two wins and nine points from six games. The other match is between two strugglers as 19th-place Reims seeks its first win this season when it hosts 17th-place Lorient.